Apple CEO Tim Cook and other executives are getting deeply involved with the behind-the-scenes production of the company's original television shows, which are set to debut later this year. Apple has been "difficult" to deal with on the project, according to unnamed agents and producers working with Apple on its foray into streaming TV (via The New York Post). 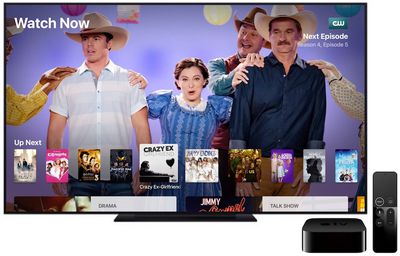 Cook and other executives have been described as "intrusive," with the biggest complaint involving numerous notes that Apple has been sending streaming partners as they watch each show and contribute their opinion. Other sources stated there has been a "lack of transparency" and "lack of clarity" on what Apple wants throughout the process.

One agent noted that Apple has been "very involved," explaining that writers and directors typically prefer to work without heavy oversight from higher-ups in corporate. This involvement has included a repeated note sent by Cook telling producers and showrunners, "don't be so mean!" It's unclear which shows this note has been sent to, and how many.

“Tim Cook is giving notes and getting involved,” said a producer who has worked with Apple. One of the CEO’s most repeated notes is “don’t be so mean!,” the source said.

Cook has visited the sets of multiple shows, including the Vancouver set of See, a futuristic science fiction show, and the Los Angeles set of the morning show drama starring Jennifer Aniston and Reese Witherspoon.

In terms of the launch, Apple's nitpicking over content and technology has caused numerous delays, and content partners are said to be slightly irritated about these delays. Original rumors suggested the service would see a public launch by the spring of 2019, but now it's believed Apple won't launch its streaming TV service until summer or fall 2019, although an event on March 25 will see the public announcement of the service.

Amid all of this, one producer stated that Apple's overall goal isn't clear enough and that a lack of clarity has caused confusion among many entertainment partners.

Another frustration is that Apple also keeps moving the target on what it wants, sources said.

“They are making big changes, firing and hiring new writers. There’s a lack of clarity on what they want,” the producer said. “A lot of the product is not as good as they hoped it to be,” he said.

We've seen similarly opposing reports over the past few months, with some suggesting that Apple was looking to avoid mature content on its TV shows and others claiming that the company was on the hunt for the next Breaking Bad. Apple might be okay with mature content, as long as it has substance and isn't gratuitous, but again today The New York Post's sources suggest that Apple's notes to showrunners include keeping content suitable for families.

At the same time, it's unclear which shows these notes were given to as Apple has well over a dozen TV shows in development, with vastly different genres among each. We'll know more about Apple's streaming TV service soon enough, as the company's rumored March 25 event is three weeks from today.

calstanford
This crap for years and the automotive self driving stuff (where Apple recently was ranked last) are the worst distractions under Tim Cook's leadership. Meanwhile the Mac has languished and hasn't seen updates in years, the iPhone has lost any kind of leadership it had and doesn't grow any more. I just don't see how competing with the big media companies and Netflix is somehow THE business model for Apple now.
Score: 46 Votes (Like | Disagree)

I just don't see how competing with the big media companies and Netflix is somehow THE business model for Apple now.

Agreed. Seems like Apple has lost all sense of what it wants to be. Cook is clueless as what to do next and it shows.
Score: 41 Votes (Like | Disagree)

Apple assigning folk to over-control something they may not be that good at just because they excelled elsewhere? (Jony Ive, cough cough)

Adam Carolla has great insights on “genius” execs chiming in uselessly and trying to steer content that’s well outside of their core competencies...sounds completely maddening at times.
Score: 23 Votes (Like | Disagree)

More power to Apple. If they actually get us another "Breaking Bad", then do whatever it takes. If, on the other hand, they deliver us some whitewashed edgeless ********, i will do a 180 on this one.

Sounds like it going to be a generic SJW bland product. It's more important to them to have a complete politically correct pokemon set than a good story. Trying to get a full pokemon set means, that they'll have to pump the story full of meaningless dribble to show that they got X/Y/Z, not just actually having a character that just might or might not be X/Y or Z.

It's the difference between "Philadelphia", a gay man's struggle with aids (it's has a purpose) and hey, we need someone to be gay, you're now gay, please add some pointless side story to show it.
Score: 22 Votes (Like | Disagree)

DNichter
Doesn't seem like a good start. I support original content because I think they can make a good product, but they need to be more hands off. Hire the best writers, directors, and actors and let them run the show. You can't be nitpicking during the creative process or you are going to end up with junk. I am sure it all has to do with making things family friendly, which can still be good content, but they need to lay out guidelines up front and let them roll.
Score: 20 Votes (Like | Disagree)

smaffei
If Cook keeps it up, he's gonna find a horse head in his bed.
Score: 19 Votes (Like | Disagree)
Read All Comments

Tuesday October 4, 2022 3:30 am PDT by Hartley Charlton
The European Parliament today voted overwhelmingly in favor of enforcing USB-C as a common charging port across a wide range of consumer electronic devices, including the iPhone and AirPods, by the end of 2024. The proposal, known as a directive, forces all consumer electronics manufacturers who sell their products in Europe to ensure that a wide range of devices feature a USB-C port. This...
Read Full Article • 384 comments