If you have ever complained about Siri on Twitter or likewise, your feedback could actually make its way to Apple executives. 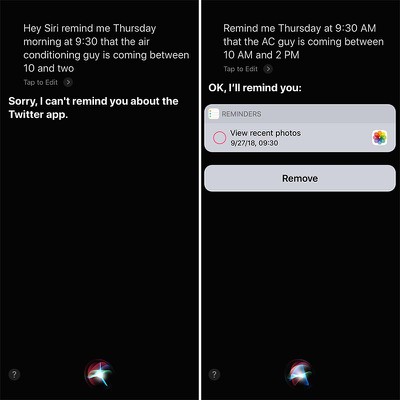 Screenshot via /r/SiriFail
A recent Apple job listing seeks an engineering program manager to "monitor what the world is saying about ‌Siri‌ through social media, news, and other sources." This will include detecting "‌Siri‌ issues that are going viral or otherwise trending" and reporting them to the ‌Siri‌ team and its leadership.

Based on user feedback, the employee will be required to provide recommendations for next steps on areas where the ‌Siri‌ user experience could be improved. The person will also work with Apple's marketing teams to ensure external information like Apple support documents are updated to clear up misunderstandings.

The employee will have a secondary responsibility of working alongside ‌Siri‌ software engineers to ensure the success of Apple marketing campaigns, press events, product announcements, and product launches involving ‌Siri‌.

As noted by VentureBeat, which first discovered the job listing, the employee will be able to "drive rapid-response solutions," hopefully meaning the company will quickly address any trending issues before they become embarrassing headlines like the major FaceTime privacy bug unearthed in late January.

Any improvements to ‌Siri‌ would be welcomed, as the assistant is widely considered to have fallen behind its rivals Amazon Alexa and Google Assistant. ‌Siri‌ has already shown some signs of progress lately under the leadership of Apple's recently promoted artificial intelligence chief John Giannandrea.

1rottenapple
You need to hire someone for these jeeez. Siri is garbage and limited. Enuff said.
Score: 24 Votes (Like | Disagree)

HobbesInVA
I have zero problems with Siri. I keep the program on permanent deactivation. :)
Score: 14 Votes (Like | Disagree)

dannyyankou
Lol, those screenshots are sad.
Score: 13 Votes (Like | Disagree)

itsmilo
Sounds like the job of an unpaid intern to be honest lol
Score: 12 Votes (Like | Disagree)

This is a real job? SIRI is a mess...stupid as spit on a sidewalk on a hot june day. Just this weekend I finished the conversion of my primary home from siri to ALEXA. The other one is already all ALEXA. I am thoroughly happy with the result. I now have 6 homepods used exclusively for music.

That's really hitting 'em where it hurts, buying 6 homepods like that. That'll teach them all about Siri being a mess.
Score: 11 Votes (Like | Disagree)
Read All Comments