Apple is developing an iPhone with a foldable display alongside LG Display, reports Korean site The Investor. Apple is said to have chosen to work with LG and not Samsung out of fears that Samsung could get ahold of sensitive tech.

This is not the first time we've heard rumors of a future iPhone with a foldable display. Back in December of 2016, rumors suggested LG's display division would begin mass-producing foldable displays for smartphones as early as 2018, with Apple said to be one possible partner. 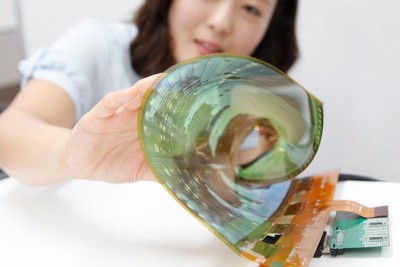 LG has shown off several foldable display prototypes over the last two years, including one that folds over like a book and a second that rolls up much like a newspaper. LG's foldable displays use flexible OLED panels and LG has been working to increase durability and yield rate.

LG is said to have recently created a dedicated task force to start developing a foldable OLED display for a future iPhone, while its siser company LG Innotek has a team developing a rigid flexible printed circuit board or (RFPCB) to go along with it.

Folding display technology is a ways off from launch, and unnamed industry sources believe panel production for an iPhone with a folding display won't kick off until 2020, which is more than two years from now.

Samsung supplies the OLED displays for the iPhone X and is also expected to supply OLED panels for Apple's 2018 iPhones, but LG recently started OLED production for phones at a factory in China and has plans to begin supplying Apple with panels as early as 2019.

Next year's devices will not include foldable display tech, but we have heard rumors suggesting an all-OLED lineup with two OLED devices in 5.85 and 6.46-inch sizes.

man3ster
yeah because that is what I need my display to do. how many scenarios can you see this useful?
Score: 18 Votes (Like | Disagree)

RtWrecklezX
Are we FINALLY getting back to flip phones?
Score: 17 Votes (Like | Disagree)

Oblivious.Robot
Does this mean that the screens from Westworld could become a reality? Fancy that!

I think there could a great potential for this kind of tech in tablets and let’s not forget wearable such as Apple Watch. Let’s just hope that battery tech makes a giant leap forward to power up all these things for days.

yeah because that is what I need my display to do. how many scenarios can you see this useful?

Have you tested a foldable device to know that it's not useful?
Score: 12 Votes (Like | Disagree)

deanthedev
I highly doubt this will happen. So many issues with trying to fold a screen.

- You can’t do a sharp fold as there’s a minimum bend radius. Which means devices are going to be much thicker.
- There’s no way you can hide the crease where it gets folded. Having a noticeable “line” in your display is going to be very distracting.
- People like devices and screens that feel solid. The biggest upgrade to the iPad was when they laminated the screen which improved the feel when typing. I doubt you can make a device that folds and maintains rigidity. It’s going to feel sloppy when touching the screen.

I don’t see this going anywhere. Not with today’s technology.

If experience has taught me anything, is to not conflate exciting patent applications, tech prototypes and Apple in the same sentence.

Maybe after the iPhone XSSS has been released, Apple's design team will consider testing new materials and form factors.

Yeah this is two sided.

1) We won't see this in Apple's phones for a whiiiile (if ever).
2) They are going to use it in a different way than what we can expect.
Score: 6 Votes (Like | Disagree)
Read All Comments

Friday May 7, 2021 6:55 am PDT by Sami Fathi
According to Apple leaker Jon Prosser, Apple's upcoming release of the MacBook Air will feature various colors, similar to the colors in the newly released 24-inch iMac. In the latest video of his YouTube channel Front Page Tech, Prosser says the same source who accurately provided him information on the first Apple silicon iMac coming in colors has told him that he recently saw a prototype...
Read Full Article • 328 comments