Apple plans to launch a foldable iPhone two years from now, according to Wamsi Mohan, an analyst at Bank of America Merrill Lynch. 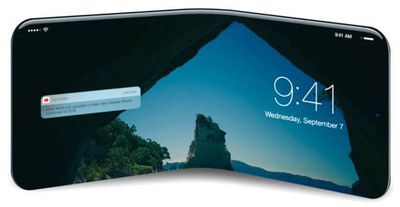 A fan-made foldable iPhone concept
Mohan shared his prediction in a research note obtained by CNBC after spending a week in Asia meeting with companies in Apple's supply chain. He expects the foldable iPhone will launch in 2020 and said it could potentially "double up as a tablet," suggesting the device could expand to have an iPad-like form factor.

LG has shown off various futuristic-looking curved and foldable display prototypes over the past three years, including one with a book-like design and another that can be rolled up like a newspaper. Both designs take advantage of the flexible property of OLED displays, compared to rigid LCD screens.

For that reason, the iPhone X is a good start on the path towards a foldable iPhone, should one ever materialize.

While not visible, the iPhone X actually has a flexible OLED display that curves behind itself on the inside of the device. The curved portion houses the display controller chip, and this clever engineering feat allows the iPhone X to have a slimmer bottom bezel, which is normally where the chip is located.

iPhone X's flexible OLED display
A foldable iPhone would require further innovation. If the device can be rolled up like a newspaper, then components like the logic board and battery would need to be flexible enough to bend rather than buckle. But if it only folds in half, then components could still be rigid and connected with flex cables.

Apple applied for a foldable display patent last year and is likely researching ways to create a foldable iPhone, but that doesn't guarantee we'll ever see a consumer-facing product. 2020 might be an overly ambitious timeframe, too, but technology can change a lot in two years, so we'll have to wait and see.

mactactic
Not going to happen!
Score: 13 Votes (Like | Disagree)

WannaGoMac
So the iPhone 6/6 plus bending was a prototype test!
Score: 10 Votes (Like | Disagree)

robertcoogan
It's going to be a hard choice for me. Get the new clamshell iPhone, or make my mortgage payment for the month. Decisions, decisions...
Score: 10 Votes (Like | Disagree)

Elian_Gonzalez
In other words, it's the reboot of the flip-phone.

And it will be interesting to watch techie boyz square that circle.
Score: 10 Votes (Like | Disagree)

PaulRustad007
A lot of Debbie Downers here on MR......where is your vision? Why the cynicism? More choices for us, the consumer. It could be neat, or it could be not. Who knows? People complain about Apple not being "innovative" and when something like this comes out, everyone scoffs at it like is a pie in the sky....
Score: 9 Votes (Like | Disagree)
Read All Comments