Samsung has been teasing its upcoming "Galaxy Fold" phone for some time and demoed a prototype of the device back in November, but coming just hours before the company's launch event, these images via Slashleaks could be the real deal. 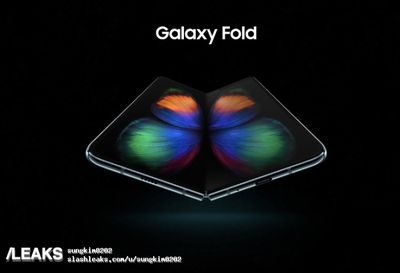 The Galaxy Fold features Samsung's new Infinity Flex display technology, and assuming no major changes since November, we can expect a device with a 7.3-inch display that can be folded in half, collapsing from a tablet size down to a 4.6-inch smartphone size.

Judging from the renders, the phone has a notch in the upper right corner of the display for the front-facing camera, and a dual-lens setup on the corresponding upper rear-side of the chassis.

Following Samsung, Huawei and Xiaomi revealed that they too will launch folding smartphones, and there are plenty of signs Apple is looking into the possibility of a foldable iPhone. Apple has filed several patent applications related to folding phones that variously fold inward, outward, and both inward and outward.

Apple supplier LG Display is said to have created a dedicated task force to start developing a foldable OLED display for a future ‌iPhone‌, while its sister company LG Innotek reportedly has a team developing a rigid flexible printed circuit board or (RFPCB) to go along with it.

Samsung's Galaxy Fold will officially debut at its February 20 event, where we can also expect the launch of the new Galaxy S10 smartphone lineup. Samsung's Unpacked event starts at 11.00 a.m. Pacific Time at the Bill Graham Civic Auditorium in San Francisco, California, with a simultaneous launch event to be held in London at 7.00 p.m. GMT.

the-bigwig
Comments are salty as hell. I can't even imagine how loved would be Apple for doing this. It's a breakthrough tech and it's just sad some of you can't accept that.
Score: 51 Votes (Like | Disagree)

johnyslats
Curious to see it in action, but personally I have no desire to own a foldable phone from any manufacturer
Score: 31 Votes (Like | Disagree)

NBAasDOGG
Funny that most companies are in the frontier of innovation (even if it’s still useless) while Apple is struggling to make a proper keyboard on the MacBooks and yet have the balls to ask $2000...

It’s our fault, it’s my personal mistake by blindly purchasing overpriced junk from this company.

H2SO4
I like the look of that, A LOT.
That's on my 'possibles' list for sure. I like iOS but Apple are seemingly trying their hardest to push me away from it.

Oh and I'm confused about this part........<snip>".....while its sister company LG Innotek reportedly has a team developing a rigid flexible printed circuit board or (RFPCB) to go along with it."

Wiesenlooser
To be honest, this looks pretty cool.

For the first shot at foldables it seems like they did a good job.

A foldable will be my next iphone / iPad. I hope I can expect one within the next 2 years.
Score: 13 Votes (Like | Disagree)

It’s not the tech, it’s the implementation.

If and when Apple uses folding screen tech, you know it will be more refined.

It’s ultimately about the experience found with the device, and not the initial buzz from the media, that will determine its trajectory. And the experience ultimately lies in a company’s ability to integrate both hardware and software together, not just about pure hardware specs in a vacuum.

... because Samsung created this first and did most of the heavy lifting on developing the tech?
Score: 12 Votes (Like | Disagree)
Read All Comments