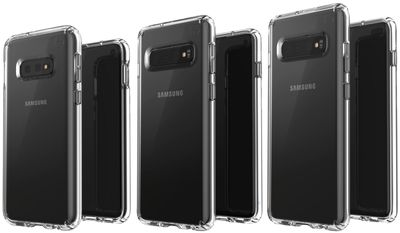 Leaked official image via @evleaks
The handsets shown in the image are encased in clear covers and understood to be (from left to right) the S10E, the S10, and the S10+. All of the phones adopt Samsung's new edge-to-edge Infinity-O display, which features a small cutout at the upper right side of the device for the camera.

The S10 with 6.1-inch display is the mid-range device, while the S10E with 5.8-inch display is expected to be the most affordable model and appears in the image with two cameras on the rear where the other two phones have three. Meanwhile the premium S10+ with 6.4-inch display features two front-facing cameras housed within a longer pill-shaped hole punch.

Samsung is able to use a single camera cutout for the S10 because it has less technology than Apple's latest iPhones, which use a notch design to house the TrueDepth camera system that enables Face ID.

However, as suggested in the image, all the devices in the S10 line-up are expected to use in-display fingerprint scanners for authentication instead of the rear-mounted scanners featured on earlier Galaxy models.

In other news, Samsung's rumored 5G variant of its upcoming flagship, the tentatively named "Galaxy S10 X", has reportedly appeared in a recent firmware development. According to Sam Mobile, the software build references only South Korean carriers, suggesting development for the U.S. and European markets has yet to reach a similar stage.

Samsung's Unpacked Galaxy S10 launch event will take place on Wednesday, February 20 at 11:00 a.m. Pacific Time at the Bill Graham Civic Auditorium in San Francisco, California, where the company is also expected to demo a functioning version of its all-new foldable phone, dubbed the "Galaxy Fold".

It still doesn't have iOS :)

Skeptical.me
It still doesn't have iOS :)
Score: 17 Votes (Like | Disagree)

markfc
I wish I could be interested in Samsung phones but sigh, I quite like my Apple integration with TV, Watch, Phone and Macbook
Score: 13 Votes (Like | Disagree)

They missed the headline feature: Terrible battery life coupled with an ad campaign that attacks Apple instead of touting their new devices.

I'm also smug about the fact that "last year's" Apple A12 is faster than upcoming Crapdragons. And I can't wait until Chevrolet sues them for using the name S10.

I often read your posts and all I'll say is you're not the typical Apple customer.

Actually, DNichter is the epitome of the typical Apple customer that Apple wants. A user who is perfectly willing to change their workflow to fit within the walls that Apple sets instead of the opposite.

where most users have their own defined "this is the way I do things". That is where we often run into onflicts with Apple's methods. We want to do things our way because more often than not we've chosen those workflows due to our own individual strengths/weaknesses.

For many of us who have problems with several of Apple's closed wall approaches, this gives us headaches. But someone like DNichter, or Abizagal (sp?) are the types of user Apple loves. They will change their very workflows, if not job expectations to work inside Apple's defined system. Thats why if you read their posts they have a hard time understanding wher we (the rest of us we) come from.

There's nothing wrong with that, especially if they can at least recognise that their situation is not the same as everyone elses. Something DNicther does well (he's always seemed fairly willing to listen to our viewpoints).
Score: 12 Votes (Like | Disagree)

I have not used Android in a few years, has it gotten better? I wonder how these phones would do running iOS (if it were possible of course)

Android as a whole has gotten better. The biggest problem is the lack of software updates. The standard $1,000 Android phone in the US still does not have the latest Android Pie due to restrictions from mobile carriers. You should never let a mobile carrier tell you when to upgrade your software. Ever.
Score: 11 Votes (Like | Disagree)
Read All Comments