Update: Apple has officially announced that WWDC 2019 will be held June 3-7 at the McEnery Convention Center in San Jose as we reported below.


Apple has yet to announce the dates for its Worldwide Developers Conference in 2019, but MacRumors has uncovered evidence that confirms the event will take place June 3-7 at the McEnery Convention Center in San Jose, California. 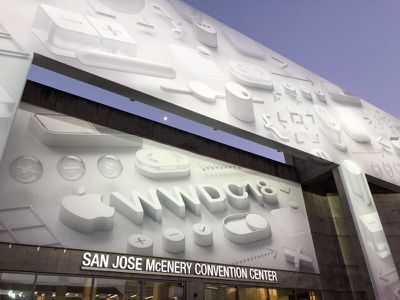 WWDC took place June 4-8 in 2018 and June 5-9 in 2017 at McEnery, so it would be natural if WWDC 2019 were scheduled for the same week of June. The weeklong conference has been hosted in the first half of June every year since 2007 and at McEnery specifically since 2017.

While we were already confident the WWDC 2019 dates would fall on June 3-7, we confirmed with a source that a large annual event of some kind will be taking place during that week at McEnery. Meanwhile, the second and fourth weeks of June are ruled out due to the already-announced O'Reilly Velocity conference on June 10-13 and the Sensors Expo on June 25-27 at McEnery.

In our continued research, we discovered that San Jose requires permitting for large public events such as Apple's WWDC Bash, which took place at the Discovery Meadow park next to McEnery in 2018.

Following that thread, we unearthed a 2019 events calendar from the City of San Jose's Office of Cultural Affairs that lists this year's WWDC Bash at Discovery Meadow on the evening of Thursday, June 6. The event is named "Team San Jose 2019 WWDC" and is organized by "Apple." An identical WWDC entry was listed in the Office of Cultural Affairs' 2018 events calendar for the actual WWDC 2018 Bash.

Last February, MacRumors accurately revealed that WWDC 2018 would be held June 4-8. Apple officially announced the dates on March 13 last year, so we could be a month out from the official announcement. We've reached out to Apple for comment, although it rarely discusses its plans until it's ready to.

WWDC tickets have been priced at $1,599 in recent years and distributed randomly via lottery. To enter the lottery last year, developers had to be a member of the Apple Developer Program prior to Apple's official WWDC date announcement on March 13, so consider registering now if you hope to attend.

The calendar entry lists an estimated attendance of 7,000 people at WWDC, consistent with last year. This total will likely include around 5,000 developers, along with 350 or so WWDC scholars, hundreds of Apple employees, and the media. Apple is expected to announce iOS 13, macOS 10.15, watchOS 6, and tvOS 13 at the event.

Update: All mentions of WWDC and Apple have been removed from the 2019 events calendar, but the June 6 event at Discovery Meadow remains listed with "Team San Jose" as the organizer. Apple is likely simply covering its tracks as it has done several times in the past when information has leaked in similar ways.

Note: While we are confident about these dates, Apple could change its plans at any time. MacRumors can't be held responsible for any airfare or accommodations booked based on this information.

Nice. What will it be this year MacOS “Yorba Linda”?? I hope they pick something SoCal this year!

otternonsense
No expectations at all. Their product line has become massively convoluted, and several SKUs are inexcusably outdated or have no reason for existence. As for OS releases, I wish they broke the annual cycle if it meant delivering better fleshed out, more compelling pieces of software. Just take the time to get it RIGHT rather than just delivering lame iterations round the clock
Score: 7 Votes (Like | Disagree)

NinjaHERO
I just started learning to code apps, so this is more exciting to me compared to previous years. :-)
Score: 7 Votes (Like | Disagree)

Greymacuser
Mark your calendars for disappointment.
Score: 7 Votes (Like | Disagree)
Read All Comments