Apple today announced that its 30th annual Worldwide Developers Conference will begin on Monday, June 3 and last through Friday, June 7, with the conference set to be held at the McEnery Convention Center in San Jose, California.

Developers are able to register to attend starting this morning. As Apple has done for many years, WWDC attendees will be selected using a lottery system because of the popularity of the conference. 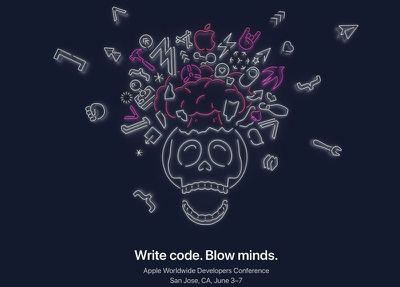 Apple is pricing tickets at $1,599, and only developers who win the aforementioned ticket lottery will be able to purchase a ticket to attend.

"WWDC is Apple's biggest event of the year. It brings thousands of the most creative and dedicated developers from around the world together with over a thousand Apple engineers to learn about our latest platform innovations and to connect as a community," said Phil Schiller, Apple's senior vice president of Worldwide Marketing. "Our developers are incredibly passionate about creating the next generation of mind-blowing experiences for the world through apps. We can't wait to get together with them and share what's next."

Developers who are chosen through the WWDC ticket lottery will be notified later in March. Apple is also making up to 350 WWDC Student Scholarships available to students and members of STEM organizations. Scholarships include a free WWDC ticket, free lodging, and a free one-year membership to the Apple Developer Program. Those who want to win a scholarship will need to create an interactive Swift Playground that can be experienced within three minutes. Apple is taking applications until Sunday, March 24, 2019 at 5:00 p.m. PDT, with scholarship winners to be notified by Monday, April 15.

Apple's WWDC keynote is used to introduce new software, to debut new hardware products, and to allow the company to network with developers from around the world. This year, we are expecting Apple to introduce iOS 13, macOS 10.15, tvOS 13, and watchOS 6.

The keynote event will be held on June 3, which is when we'll get our first look at the new operating systems. Right now, it's not known if new hardware will make a debut, but we are waiting on news about Apple's upcoming high-end modular Mac Pro. Additional details about what we can expect to see will undoubtedly surface as the June conference date approaches.

Apple has been holding its Worldwide Developers Conference in San Jose since 2017, and the event always takes place right around the same time in June.

Developers who are not chosen to attend the conference will be able to live stream it through the Apple Developer website or the dedicated WWDC app for iPhone, iPad, and Apple TV.

Hard to believe it's been almost 6 years already.

Yeah, it seems like just yesterday I made this stupid image in response to all the people claiming the new Mac Pro looked like a garbage can:

ninjadex
Not worth attending anymore, sadly. And no, it's not the price.
Score: 16 Votes (Like | Disagree)

twocents
Let's see a mushroom cloud, a skull, an upside down star / pentagram, a lightning bolt, and devil horn hand sign all on a dark background. Illuminati and dark mode confirmed! /s
Score: 11 Votes (Like | Disagree)

and 1989 others
I used to book days off work to watch the live stream if the key notes they where that good. Never forget the moment SJ pulled out the 1st MBA from
An envelope, such theatre. Now I catch up with them from twitter, the day after- if I remember.
Score: 10 Votes (Like | Disagree)
Read All Comments