Not a lot can be seen in the video, but the words in the video appear to wrap around a foldable surface, a reference to Samsung's first smartphone with this folding design.


Samsung in November introduced its Infinity Flex display technology, demonstrating it in a device with a 7.3-inch flexible display that can be folded right in half, collapsing from a tablet size down to a smartphone size. 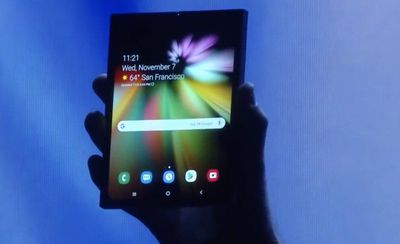 At the time, Samsung said that it had to invent new materials and reimagine the display from the ground up to create its Infinity Flex technology.

Samsung's foldable smartphone will debut at its upcoming February 20 event, which will also see the launch of the new Galaxy S10 smartphone lineup.

It’s a phone… It’s a tablet… It’s a phone that unfolds into a tablet! #SDC18 pic.twitter.com/FgwpJPjqTn — SAMSUNG DEVELOPERS (@samsung_dev) November 7, 2018

Samsung will introduce its new smartphones at 11:00 a.m. Pacific Time at the Bill Graham Civic Auditorium in San Francisco, California, months ahead of when Apple will debut its 2019 iPhone lineup.

There have been some rumors suggesting Apple is exploring foldable display content, but right now, there's no concrete evidence that Apple is working on a smartphone with a foldable display.

AngerDanger
More than foldable displays, I'd like to see two seamless but separate microLED displays similar to the ones demoed at CES…

…but that have a hinge connecting them on the other side. This way, you can have both displays covered in durable glass and perfectly straight:

RecentlyConverted
For those saying its too thick, the device shown was a early prototype, which the demonstrator said was heavily disguised. Its likely the finished article will be much sleeker. Imaging an iphone in your pocket, that unfolds to an iPad. What a great piece of hardware (just need iOS to catch up).
Score: 8 Votes (Like | Disagree)

spiderman0616
1) Bending/folding screens are really cool tech. I think they have a future in mobile and non-mobile devices.
2) I don't mind Apple not jumping on this first, because most of these first tries are going to range from bad to terrible. Samsung's might have more polish than the rest.
3) Prepare for LOTS of click bait, hit pieces, hot takes, and bad PR from the tech media (this very site will probably be one of the ones leading the charge) for the duration of 2019, and probably most of 2020, claiming that Apple is toast without a folding phone.

They can shove that stupid foldable phone... Why would anyone want that?

I bet if Apple bring one out you will buy it.
Score: 6 Votes (Like | Disagree)
Read All Comments