Samsung's upcoming Galaxy S10 flagship smartphone was spotted out in the wild today, with leaker Evan Blass sharing an image of the new device.

Rather than adopting a notch like many other smartphone manufacturers, Samsung is using an edge-to-edge display that features a small camera cutout at the upper right side of the device. Aside from this circular cutout, the rest of the smartphone's front side is taken up by display area. 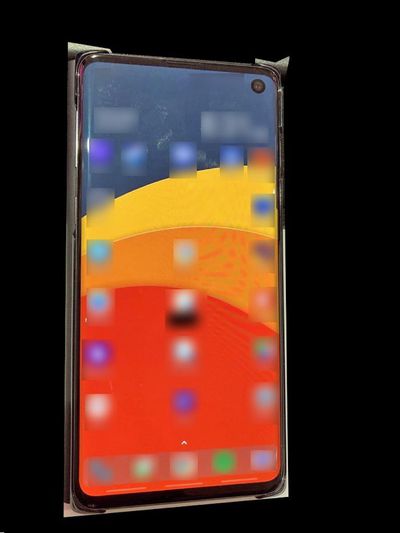 Samsung is able to use a single camera cutout for the S10 because it is housing less equipment than Apple's latest iPhones. There's no TrueDepth camera system with multiple sensors that include an IR camera and dot projector in addition to the standard front-facing camera, so Samsung is able to introduce a smaller cutout.

In the tweet, Blass calls the S10 the "Beyond 1," which is one of three S10 smartphones Samsung has in the works. As explained by CNET, the Beyond 1 is expected to be the same size as the Galaxy S9, with a 6.1-inch screen and a single front-facing camera.

Rumors have suggested other S10 models (at least one model will be larger) will have two front-facing cameras, so the cutout on these devices, which has been seen in renderings, could be a bit bigger. At least some of the Galaxy S10 smartphones are expected to feature a four-camera rear setup.

Galaxy S10 rendering via OnLeaks
Samsung's Galaxy A8s smartphone also featured the same hole punch-style design that's seen in the Galaxy S10, with the camera located at the top left of the device.

It's not known if Apple will be able to follow in Samsung's footsteps with such a small camera cutout, but we have heard an early rumor suggesting Apple's 2019 devices could feature a slimmed-down notch, and there's even been a rumor indicating Apple is working on a smartphone with no notch at all.

For more of what to expect from Apple's 2019 iPhones, likely to be unveiled later this year in September, check out our dedicated roundup.

AngerDanger
Meanwhile, if any iPhone users are wishing for the same effect, feel free to try my DIY hole-punch method:

deebinem
Dood, how in the hell do you even get these out so damn fast!? LOL
Score: 23 Votes (Like | Disagree)

farewelwilliams
add some bezel on the sides. increase bezel just slightly at the top. then you have symmetry. JFC Samsung, you can't even get the design right.
Score: 16 Votes (Like | Disagree)

Meanwhile, if any iPhone users are wishing for the same effect, feel free to try my DIY hole-punch method:

You still have to remove the notch. The all iPhones will look dated again after MWC in Barcelona. All the top models from manufacturers are coming with all screen OLED and better specs than Apples iPhone. On top of that they will be cheaper than an iPhone XR. And Cook is blaming the trade war with China:rolleyes:

fokmik
wtf is this? most asymmetric phone ? the cut out isn't central and it has 3 different bezels sizes ??
Score: 14 Votes (Like | Disagree)

I am on the Hole Punch is ugly bandwagon but like the iPhone X, things may changed when viewed in person.
Score: 14 Votes (Like | Disagree)
Read All Comments