Apple has replenished stock of the iPhone SE on its online clearance store for the third time this month. These are brand new, unopened, and unlocked models starting at $249 in the United States. Availability dwindled very quickly in the each of the first two times the ‌iPhone SE‌ was added, so act fast. 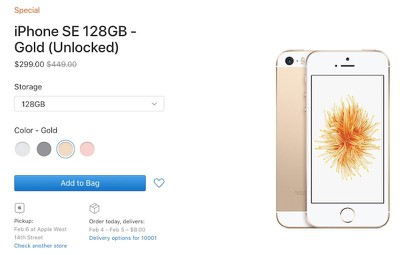 Apple is offering the ‌iPhone SE‌ with 32GB of storage for $249 and with 128GB for $299 in Silver, Space Gray, Gold, and Rose Gold. Tech specs include a 4-inch Retina display, A9 chip, Touch ID, 12-megapixel rear camera, and 3.5mm headphone jack.

Prior to being pulled, the ‌iPhone SE‌ was available with 32GB and 128GB of storage for $349 and $449 respectively, so Apple is offering $100 to $150 off. The device was originally released in March 2016 and was popular among fans of smaller smartphones and those who preferred the iPhone 5-like design.

Relentless Power
Test three initiated. This is remotely strange by Apple with these three separate clearance launches. I hope the SE is revived in some form or another. These are the products that deliver diversity for those who don’t want a larger phone.
Score: 26 Votes (Like | Disagree)

Silver Idaten
I GOT IT I ****ING FINALLY GOT IT WOOOOOOO! 128GB in Space Gray!

What's funny is that I ordered a 64GB iPhone SE from an eBay seller basically new in box and it's arriving today because I didn't think this would happen again. Whoops. I guess I'll have to sell that privately now.

thadoggfather
I dont get it, are they testing the waters to see if people would be interested in an SE2? The answer is HECK YES

HappyDude20
If the SE had 3D Touch I would easily consider it as Apple’s best phone.

Either way, it’s an incredibly fast and reliable phone, at a perfect size and great price.
Score: 18 Votes (Like | Disagree)

yaxomoxay
is apple trying to gauge the demand?
Score: 13 Votes (Like | Disagree)

arkitect
Always puzzled by people who have to jump in on these threads just to trash the iPhone SE.

Why?
You'd think they'd be happy Apple are selling more units… no?

Or is this some teenage male thing? Big, Bigger, **** Yeah Bestest!
Score: 12 Votes (Like | Disagree)
Read All Comments

Tuesday June 2, 2020 1:31 am PDT by Tim Hardwick
Apple Music has cancelled its Beats 1 radio schedule for Blackout Tuesday and is suggesting that listeners tune in to a radio stream celebrating the best in black music. Blackout Tuesday is a campaign organized by the music industry to support Black Lives Matter after Minneapolis citizen George Floyd was killed by police in the course of his arrest. On launching Apple Music, many users...
Read Full Article • 430 comments

Thursday June 4, 2020 10:07 am PDT by Juli Clover
We still have a few months to go before Apple unveils the iPhone 12, but rumors about the iPhone 13, coming in fall 2021, are already circulating. Japanese site Mac Otakara today shared a rough 3D printed mockup of a 5.5-inch iPhone said to be coming in 2021, which is from "Alibaba sources." The model may be built on leaked specifications and rumors, but where the info comes from is unclear. ...
Read Full Article • 109 comments