Apple is working on an updated version of the $329 6th-generation iPad and a new, cheaper iPad mini, Bloomberg today confirmed in an extensive report on Apple's future product plans.

The new version of the ‌iPad‌ will feature a "roughly 10-inch screen," which would be slightly larger than the 9.7-inch model that is currently available. The device is also expected to have a faster processor and a Lightning port instead of a USB-C port. 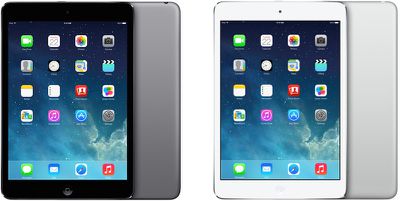 Apple is also working on an ‌iPad mini‌ 5, a followup to the 2015 ‌iPad mini‌ 4. The ‌iPad mini‌ 5 will be cheaper than the existing model, but no other details were provided.

Prior rumors have suggested both the new ‌iPad‌ and the ‌iPad mini‌ 5 will feature Touch ID Home buttons rather than Face ID, which would be appropriate as both are seemingly positioned as lower-cost devices.

Code found in iOS 12.2 indicates the two new tablets could potentially offer support for the Apple Pencil and Smart Keyboard as well.

According to Bloomberg, Apple could be planning to introduce the new iPads "as early as this spring," which is in line with other recent information.

New ‌iPad‌ models were registered with the Eurasian Economic Commission earlier this month, something that is generally done shortly ahead of a product launch, and references to new ‌iPad‌ models have been found in iOS 12.2.

For the last several years, Apple has held an event in March, and the company could be planning to do the same thing this year. If that's the case, we could see the new ‌iPad‌ and the ‌iPad mini‌ 5 at some point in March.

As for the iPad Pro, Apple is said to be planning a major upgrade for 2020 with a laser-powered 3D camera for augmented reality purposes. No major changes are planned for 2019, and it is unclear if the ‌iPad Pro‌ will get a 2019 update at all.

weup togo
It's borderline insane that you can get a larger ipad for $329 that has capabilities pretty close to a $1200 device. I know screen techs vary, but at some point you run out of excuses for the markups.
Score: 15 Votes (Like | Disagree)

Apple is also working on an iPad mini 5, a followup to the 2015 iPad mini 4. The iPad mini 5 will be cheaper than the existing model, but no other details were provided.

Here's to hoping for a more uniform price decrease across the board.
Score: 13 Votes (Like | Disagree)

ipedro
A 7" all screen iPad mini with LTE would be a fantastic replacement for an iPhone. My Watch is gradually becoming the only device I always carry with me. For times when I need a full screen, I'd rather carry around a small notebook sized iPad mini than an iPhone.
Score: 10 Votes (Like | Disagree)

DesertNomad
I really hope the mini 5 has a laminated screen and isn't a downgrade from the mini 4.
Score: 5 Votes (Like | Disagree)
Read All Comments

Monday November 28, 2022 10:42 am PST by Juli Clover
Apple has cut back on its Twitter advertising, according to Twitter CEO Elon Musk. In a tweet, Musk said that Apple has "mostly stopped" its Twitter ads, asking if Apple hates "free speech." Musk went on to publish a poll asking if Apple should "publish all censorship actions" taken that impact customers and he began retweeting content from companies that Apple has had moderation discussions ...
Read Full Article • 1432 comments