The filings are legally required for any encrypted devices sold in Armenia, Belarus, Kazakhstan, Kyrgyzstan, and Russia. 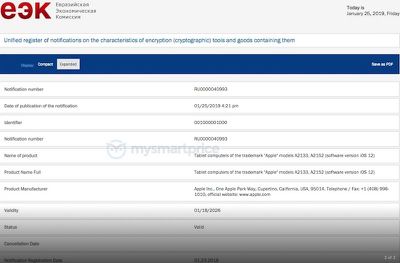 These models could represent new versions of the iPad mini and the 9.7-inch ‌iPad‌, which may become 10 inches based on recent rumors.

Eurasian Economic Commission filings like these have foreshadowed the release of new Apple products on numerous occasions, including multiple iPad and iPad Pro models, the iPhone 7 and iPhone 7 Plus, Apple Watch Series 2 and Series 4, AirPods, the 2018 MacBook Pro with Touch Bar, and several other devices.

March is a common month for both Apple's first event of the year and ‌iPad‌ refreshes, so perhaps we'll see new models then.

Update: A seventh ‌iPad‌ model — A2126 — was also filed in the Eurasian database today.

nburwell
An updated iPad Mini model would be huge. Not that I'm in the market for one, but I know there are a lot of consumers (mainly on here) who want an updated version of the Mini 4.
Score: 13 Votes (Like | Disagree)

MacRazySwe
MacRumors, is it not most likely that the new budget iPad will just reuse the old 10.5" Pro chassis, rather than developing a "New" 10" model? Just like the iPad 9.7" is just an iPad Air (1). I just don't see Apple justifying the development cost of a new 10" design when they have the existing molds/parts from the old 10.5.

I think the lineup will be:

If so, the cheaper 10.5 model could be a very appealing option at the right price point.
Score: 9 Votes (Like | Disagree)

AkuskaUK
I hope this rumour of a new mini isn't a massive disappointment. Using my iPhone Xs and then going back to my mini is an eyesore. Updated internals and screen, instant buy.
Score: 8 Votes (Like | Disagree)

magicschoolbus
Like I have been saying.. an iPad Mini cellular would be in every Uber in NYC.
Score: 8 Votes (Like | Disagree)

dspdoc
How about some focus on Macs?
Score: 8 Votes (Like | Disagree)

now i see it
The hardware as it stands today is fine. No need for new stuff. The Achilles heel of the iPad (& iPhone) is the jump-through-hoops OS.
Score: 8 Votes (Like | Disagree)
Read All Comments