Apple today updated its website to promote a monthly payment option for iPhone XR and iPhone XS trade-ups in the United States. 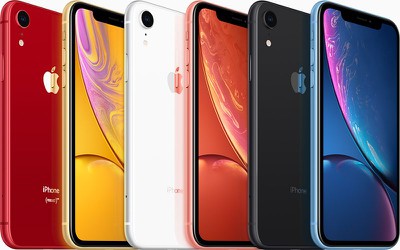 Paying in full remains an option, with the ‌iPhone XR‌ and ‌iPhone XS‌ starting at $449 and $699 respectively with the trade-in of an ‌iPhone‌ 7 Plus or ‌iPhone‌ 8. Trade-in values are up to $100 higher than usual as part of Apple's promotion, which doesn't have an end date in the U.S. yet but ends February 28 in Asia.

The monthly payment trade-in option is not available online. There is zero interest collected and a credit check is required.

Apple has been heavily promoting ‌iPhone XR‌ and ‌iPhone XS‌ trade-ins with a banner on the homepage of its website, store signage, emails to older ‌iPhone‌ users, and more since shortly after the smartphones launched last year.

Earlier this month, Apple slashed its revenue guidance by up to $9 billion for the first quarter of its 2019 fiscal year. In a letter to shareholders, Apple CEO Tim Cook said the company is undertaking and accelerating multiple initiatives to improve its results, including making it simple to trade in a phone at its stores.

SoN1NjA
More aggressive attempts to sell phones that are too expensive to begin with
Score: 63 Votes (Like | Disagree)

TheShadowKnows!
Rocking my iPhone SE until it is EOL. As well as my wife's.
[Prefer to use the money to go with my lovely wife to Europe.]
Score: 56 Votes (Like | Disagree)

seatton
No option for kidney trade in, no buy...
Score: 34 Votes (Like | Disagree)

aaronhead14
They're so desperate! If they just priced the dang things fairly in the first place, then they wouldn't feel the need to do this. haha
Score: 30 Votes (Like | Disagree)

Rocking my iPhone SE until it is EOL. As well as my wife's.
[Prefer to use the money to go with my lovely wife to Europe.]

It genuinely is refreshing to see someone with such common sense. It blows my mind that people squander money each year on 1k+ devices. I'd much rather spend it on my mortgage or going on holiday.
Score: 23 Votes (Like | Disagree)

Mackinjosh
PLEASE BUY OUR OVERPRICED PHONES! Pretty please! If you don't we'll be forced to lower the prices, and no one wants that.
Score: 22 Votes (Like | Disagree)
Read All Comments

Friday July 10, 2020 11:12 am PDT by Juli Clover
Apple this month published a support document that warns customers against closing their Mac notebooks with a cover over the camera as it can lead to display damage. Image via Reddit Apple says that the clearance between the display and the keyboard is designed to very tight tolerances, which can be problematic. Covering the camera can also cause issues with automatic brightness and True Tone....
Read Full Article • 274 comments

Friday July 10, 2020 2:58 am PDT by Tim Hardwick
At last month's WWDC, Apple officially announced that its Mac computers will be transitioned from Intel x86 to homegrown Apple Silicon chips. Apple said it plans to deliver the first Apple Silicon Mac by the end of the year and complete the transition in about two years. According to Apple analyst Ming-Chi Kuo, a 13.3-inch MacBook Pro with a form factor similar to the current 13.3-inch...
Read Full Article • 167 comments