With support for the now-discontinued Windows 10 Mobile devices set to end on December 10, 2019, Microsoft is recommending that its current Windows 10 Mobile customers move to an Android or iOS device instead. 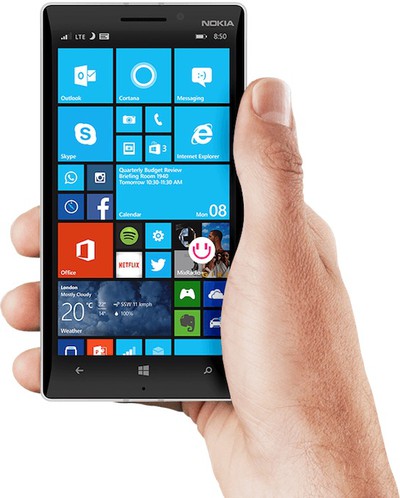 With the Windows 10 Mobile OS end of support, we recommend that customers move to a supported Android or iOS device. Microsoft's mission statement to empower every person and every organization on the planet to achieve more, compels us to support our Mobile apps on those platforms and devices.

Microsoft ended support for Windows Phone in July 2017 and stopped active development on Windows 10 Mobile in October of that year, leading to the death of the platform. Microsoft struggled to get app developers to write apps for the device, and it was also never able to establish a strong user base.

With the abandonment of Windows 10 Mobile, Microsoft has been focusing on other platforms and has a wide array of apps available for both iOS and Android devices.

All customers who have a Windows 10 Mobile device will be able to keep using it after December 10, 2019, but no further updates will be available.

G5isAlive
Wouldn't it have been easier to call the two people still using it?

Its going to be interesting to see how many pro windows mobile 10 people come out of the woodwork now to say how better it is than IOS.
Score: 26 Votes (Like | Disagree)

MS really missed the ball on a mobile OS.

Gsmaniac
Before she moved to iOS my mum had a Nokia lumia. I really enjoyed it and would have used it over Android any day. It’s a shame it didn’t take off.
Score: 13 Votes (Like | Disagree)

Monday July 13, 2020 6:50 am PDT by Joe Rossignol
Earlier this year, Apple agreed to settle a U.S. class action lawsuit that accused the company of "secretly throttling" older iPhone models. Now, eligible iPhone owners are beginning to be notified about their legal rights and options. Under the proposed settlement, Apple will provide a cash payment of approximately $25 to each eligible iPhone owner who submits a claim, with its total payout ...
Read Full Article • 123 comments

Monday July 13, 2020 9:31 am PDT by Juli Clover
Apple today shared a funny video focused on the problems that people working from home have to deal with, including noisy children, chaotic schedules, communication issues, and more. The video focuses on showing off Apple products and their capabilities that can be useful when working from home, such as the ability to scan a document with an iPhone, mark up a PDF, Siri Reminders, and more.The...
Read Full Article • 80 comments