TCL on AirPlay-2 Enabled TVs: 'We Are Currently Committed to Roku'

Earlier this week, Apple announced that AirPlay 2-enabled smart TVs are coming from leading manufacturers, including Samsung, LG, Vizio, and Sony. Those four brands lead the TV market in the United States, but up-and-coming Chinese vendor TCL has made a name for itself stateside over the past few years. 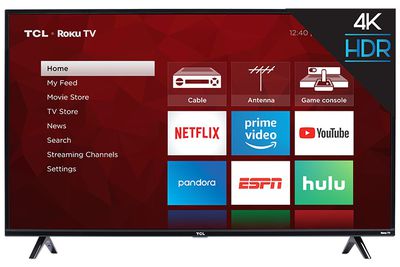 When asked if TCL would be willing to work with Apple on adding AirPlay 2 support to its smart TVs, a spokesperson for TCL told MacRumors the company is "currently committed to Roku," which has a software platform for smart TVs.

TCL's partnership with Roku doesn't necessarily preclude AirPlay 2 support, but neither company is willing to promise it right now. A spokesperson for Roku said "we don't have anything to share regarding this now." We also asked Apple if it would be willing to work with TCL, but did not receive a response.

TCL describes itself as "America's fastest-growing TV brand" and the "third largest TV manufacturer in the world." The company has been able to gain market share in the United States thanks to both Roku integration and its generally less expensive lineup of smart TVs compared to the likes of Samsung and LG.

At least for now, however, those who want those AirPlay 2 features on their TCL smart TV will have to consider options from its competitors instead.

For my next tv I was looking at them or Vizio. They made my shopping research a lot easier
Score: 10 Votes (Like | Disagree)

ignatius345
Yawn. I honestly couldn't care less what's installed on a TV because I'm going to bypass all of it and plug the inputs of my choice (currently Apple TV, a blu-ray player and a PS4) through the HDMI and never touch the crapware the thing comes with. I'd rather my purchase dollar go toward the quality of the display instead. WAY easier to just plug in new devices from time to time as they're upgraded than buy a new TV.
Score: 9 Votes (Like | Disagree)

69Mustang
That's too bad. They make decent panels that provide an avenue for people to get into 4K without breaking the bank.
Score: 8 Votes (Like | Disagree)

macpro2000
Cheap stuff. I would never buy a TCL display. It’s like buying a Hyundai.
Score: 7 Votes (Like | Disagree)

not gonna lie i was about to get a TCL 4k tv for my sister for xmas but when i went to bestbuy and saw it next to a samsung 4k panel for the same price... it was no question. samsung >>>>>>

You made the wrong call, actually. Samsung does make some good TVs, but the stuff they make in TCL's price range is trash. (Check Rtings, Wirecutter, et cetera for the numbers) Low picture quality, bad HDR implementation (i.e. it can receive HDR signal but not actually reproduce it, poor software support, and so on.
Score: 5 Votes (Like | Disagree)
Read All Comments