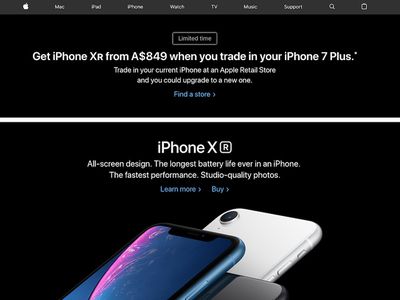 The promotion has also gone live in the China region, as spotted by 9to5Mac, including Hong Kong, Taiwan, and Macao.

As in the United States, Apple is offering higher trade-in values for select older iPhone models towards the purchase of a new iPhone XR or iPhone XS. In Australia, for example, the iPhone XR starts at $1,229, but customers can purchase the device for as low as $849 when trading in an iPhone 7 Plus for a limited time.

In certain countries, the promotion is only available at Apple Stores, but it is also available on Apple.com in some regions. Apple says the offer ends January 31, 2019 in China and Japan, but it has yet to specify a deadline in other countries.

Many analysts have expressed concerns about weakening iPhone sales, and Apple's aggressive marketing of the iPhone XR in particular and its decision to stop disclosing iPhone unit sales starting next quarter fit that narrative. Apple's stock price is down nearly 30 percent since the day of its last earnings report.

pweicks
I hope Cook’s greed comes back to bite him.
Score: 29 Votes (Like | Disagree)

Kanyay
Apple has thrown their dignity to the side to try to get these things to sell lmao
Score: 26 Votes (Like | Disagree)

rmoliv
They are really, really desperate to sell these phones!
Score: 25 Votes (Like | Disagree)

They are really, really desperate to sell these phones!

But the Apple defence league keep saying that they aren't and that everything negative is just fake news and is a huge conspiracy.

Or is it fake news that Apple is doing this? I am just so confused.
Score: 17 Votes (Like | Disagree)

vvs14
I went to the Apple store just because of this offer to trade in my iPhone 6s. $200 is a solid value without the hassle of eBay or craigslist. But after playing around with the Xs, saw no compelling reason to trade my phone in, especially at that price of $799 after the trade in. Xr did not appeal to me to begin with. 6s is pretty solid and with the new battery that I put in, its as good as new.
Score: 15 Votes (Like | Disagree)

I hope Cook’s greed comes back to bite him.

Appears it already has
Score: 12 Votes (Like | Disagree)
Read All Comments

Wednesday June 29, 2022 4:43 am PDT by Sami Fathi
Fifteen years ago to this day, the iPhone, the revolutionary device presented to the world by the late Steve Jobs, officially went on sale. The first iPhone was announced by Steve Jobs on January 9, 2007, and went on sale on June 29, 2007. "An iPod, a phone, an internet mobile communicator... these are not three separate devices," Jobs famously said. "Today, Apple is going to reinvent the...
Read Full Article • 206 comments

Tuesday June 28, 2022 2:45 pm PDT by Juli Clover
Apple last week launched an updated version of the 13-inch MacBook Pro, and it is the first Mac that is equipped with an updated M2 chip. As it's using a brand new chip, we thought we'd pick up the M2 MacBook Pro and compare it to the prior-generation M1 MacBook Pro to see just what's new. Subscribe to the MacRumors YouTube channel for more videos. For the video comparison, we're using the...
Read Full Article • 71 comments