Crudup will play Cory Ellison, a "forward-thinking president of the network news division," while Mbatha-Raw will play Hannah Shoenfield, a "whip-smart and charming" booker of talent. 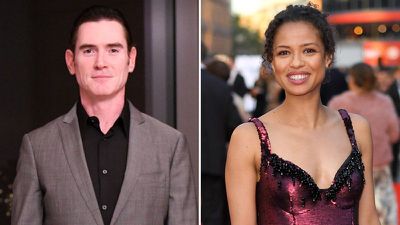 Image via Shutterstock
Mbatha-Raw is known for "Black Mirror," "A Wrinkle in Time," "Irreplaceable You," and "The Cloverfield Paradox," while Crudup is known for his roles in "Spotlight," "Jackie," "Alien: Covenant," and "Justice League."

The as of yet unnamed morning show drama will also feature Jennifer Aniston and Reese Witherspoon, and, as announced earlier this week, Steve Carell, best known for "The Office."

The upcoming show is based on Brian Stelter's non-fiction book "Top of the Morning: Inside the Cutthroat World of Morning TV." It will explore the drama-filled lives of the men and women who star on morning talk shows.

Apple has already signed on to air two 10-episode seasons of the show, which is being produced by Witherspoon and Aniston.

Apple has more than a dozen original television shows in the works, the first of which could debut in March 2019 through a rumored video service that Apple is planning to launch. At least some of the content included in the upcoming video service could be free to watch through the Apple TV app.

vagos
"It will explore the drama-filled lives of the men and women who star on morning talk shows."

wtf is a gugu? she get named after the first sound she made :D

"Her first name is the shortened version of "Gugulethu", a contraction of [I]igugu lethu, which means "our treasure" in Zulu"

I don't watch Tv of any kind anyway so am indifferent other than it being a new business for Apple.

Says the shareholder with Dr. Phil as their avatar...
Score: 5 Votes (Like | Disagree)

"It will explore the drama-filled lives of the men and women who star on morning talk shows."

Never watched The Newsroom on HBO?
Score: 5 Votes (Like | Disagree)

I'm sure this will be a smash... right up there with Keeping Up With the Kardashians. :rolleyes:

I think I understand the point you're trying to make... I'm not really a fan of "reality" television either.

But you could have picked an example that hasn't been on TV for the last 11 years... :p
Score: 5 Votes (Like | Disagree)

dontworry
Not sure what Apple is thinking with this show. Are people really interested in a show about a show? Does anybody care how "cutthroat" morning shows are? Seems really out of touch for normal everyday folks.
Score: 3 Votes (Like | Disagree)
Read All Comments

Monday September 26, 2022 6:23 am PDT by Sami Fathi
iPhone 14 Pro customers on the Verizon network in the U.S. are reporting issues with slow and unreliable 5G cellular connections and calls randomly dropping. Several threads on Reddit (1,2,3) and the MacRumors forums chronicle issues faced by Verizon customers and Apple's latest iPhone. According to user reports, signal strength on the iPhone 14 Pro is unreliable and weak, while other...
Read Full Article • 159 comments