For the first time since Bloomberg published a highly controversial story suggesting Chinese spies planted microchips in Supermicro server motherboards Apple used in its iCloud facilities, Apple CEO Tim Cook has gone on the record to vehemently deny the claims.

In an interview with BuzzFeed News, Cook said there is "no truth" to the story about Apple, before making the unprecedented move of calling on Bloomberg to publish a retraction. 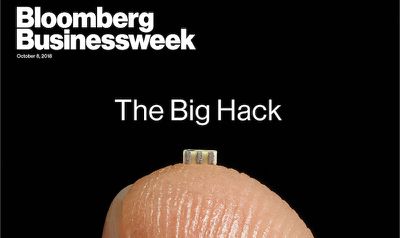 Since the report went live earlier this month, Apple has refuted Bloomberg's claims in multiple clearly worded statements denying such an incident ever took place. Apple maintains that the story is "completely untrue," malicious chips were never found in its servers, and there was never an FBI investigation into the incident.

Bloomberg has continued to stand by its original report, which, based on info obtained from 17 unnamed sources, said that Apple, Amazon, and other tech companies had purchased and installed Supermicro servers that had been tampered with by the Chinese government. Small chips were allegedly implanted into server motherboards, allowing China to access corporate secrets and other information.

Apple did have an issue with Supermicro servers that led to the company dropping Supermicro as a supplier, but the relationship ended after malware was discovered on a single server in an incident unrelated to Bloomberg's claims.

According to Apple CEO Tim Cook, though he only spoke out publicly about the Bloomberg story this week, he's been involved in Apple's response "from the beginning."

"I personally talked to the Bloomberg reporters along with Bruce Sewell who was then our general counsel. We were very clear with them that this did not happen, and answered all their questions," said Cook. "Each time they brought this up to us, the story changed and each time we investigated we found nothing."

Cook went on to say that Bloomberg failed to provide Apple with specific details about the malicious chips the company supposedly found and removed, and that Bloomberg's claims are based on "vague secondhand accounts." Cook told BuzzFeed that Apple did a deep search through all of its documentation and could find zero evidence of malicious chips or an FBI investigation.

"We turned the company upside down," Cook said. "Email searches, data center records, financial records, shipment records. We really forensically whipped through the company to dig very deep and each time we came back to the same conclusion: This did not happen. There's no truth to this."

As BuzzFeed points out, Apple has never publicly called for a retraction of a story before, even in instances where incorrect information was published. Following Cook's discussion with BuzzFeed, the site again contacted Bloomberg, and Bloomberg once again refused to budge.

"Bloomberg Businessweek's investigation is the result of more than a year of reporting, during which we conducted more than 100 interviews," a spokesperson told BuzzFeed News in response to a series of questions. "Seventeen individual sources, including government officials and insiders at the companies, confirmed the manipulation of hardware and other elements of the attacks. We also published three companies' full statements, as well as a statement from China's Ministry of Foreign Affairs. We stand by our story and are confident in our reporting and sources."

Along with multiple strongly worded denials from Apple, including one to Congress, several other sources and government agencies have supported Apple's claims that the information shared in Bloomberg's story is false.

The UK's Cyber Security Agency, the Department of Homeland Security, former FBI general counsel James Baker, and NSA Senior Advisor Rob Joyce have all questioned the veracity of Bloomberg's claims and have denied knowledge of such an investigation.

- rob -
This is getting a little bit weird. For Tim to call for a retraction suggests the article must have hit on a core value of the company.

I would guess it has to do with customer privacy and customer trust, where if Apple was the victim of a malicious actor like this and then covered it up, customer data could have been stolen without acknowledgment.

That Bloomberg refuses to stand down is a pretty serious statement from that news organization. I’ve worked with their reporters before and they are professionals.

So I am surprised by this situation where Apple has ratchets it up as far as it can go and Bloomberg has not backed down or released additional information to support the claim.

Andres Cantu
Bloomberg reported on weak iPhone X sales last year and they never apologized for being wrong. Don’t bank on this either, Tim.
Score: 28 Votes (Like | Disagree)

Bloomberg reported on weak iPhone X sales last year and they never apologized for being wrong. Don’t bank on this either, Tim.

If someone wrote some false things about my company, I would be suing, not asking politely for a retraction.

What would happen if it wasn't? Not saying its real but saying WHAT IF...? Something is definitely fishy here but which side it is will only be known in about 10-20 years :D
Score: 19 Votes (Like | Disagree)
Read All Comments