Bloomberg Businessweek today reports that around three years ago, the Chinese military began inserting microchips on Supermicro server motherboards while they were being manufactured in China, providing the Chinese government with a stealth doorway into any network that used the tampered hardware. 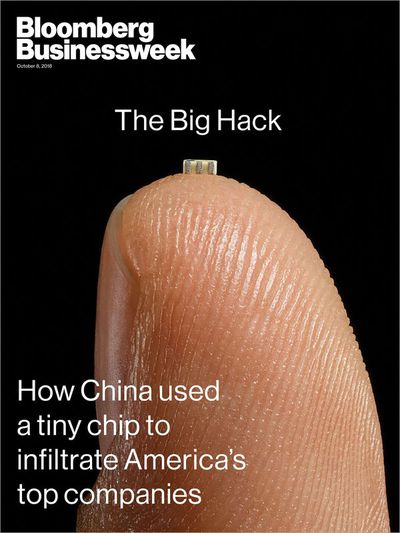 The report cites an official who said investigators found the attack eventually affected nearly 30 companies, including Apple and Amazon, along with a major bank and government contractors in the United States.

The microchip was placed on the motherboards in a way that allowed it to inject its own code or alter the order of the instructions the CPU was meant to follow, according to the report. One government official said China's goal was "long-term access to high-value corporate secrets and sensitive government networks."

No consumer data is known to have been stolen, according to the report, but the extent of the attack appears to be unclear.

Apple was a longtime Supermicro customer, with plans to order more than 30,000 of its server motherboards in two years for its global network of data centers, which power services like the App Store and Siri.

Documents seen by Businessweek show that in 2014, Apple planned to order more than 6,000 Supermicro servers for installation in 17 locations, including Amsterdam, Chicago, Hong Kong, Los Angeles, New York, San Jose, Singapore, and Tokyo, plus 4,000 servers for its existing North Carolina and Oregon data centers. Those orders were supposed to double, to 20,000, by 2015.

The report claims Apple had around 7,000 of the motherboards in its data centers when its security team came across the microchips.

Apple reportedly discovered the suspicious chips on the motherboards around May 2015, after detecting odd network activity and firmware problems. Two senior Apple insiders were cited as saying the company reported the incident to the FBI, but kept details about what it had detected tightly held.

In response to Bloomberg's latest version of the narrative, we present the following facts: Siri and Topsy never shared servers; Siri has never been deployed on servers sold to us by Super Micro; and Topsy data was limited to approximately 2,000 Super Micro servers, not 7,000. None of those servers has ever been found to hold malicious chips.

Amazon also denied the report, while Supermicro said it remains unaware of any such investigation. Chinese officials did not directly address the report, stating that "supply chain safety in cyberspace is an issue of common concern, and China is also a victim."

However, in addition to the three Apple insiders, the report says four of six U.S. officials confirmed that Apple was a victim.

Apple did acknowledge a 2016 incident in which it discovered an infected driver on a single Supermicro server in one of its labs. Apple said that one-time event was determined to be accidental and not a targeted attack.

Early last year, The Information reported that Apple cut ties with Supermicro in 2016 after unearthing a security vulnerability in at least one of its servers, which seems to be the incident that Apple is referring to in its statement. Apple has since moved on to other server suppliers, including ZT Systems and Inspur.

Don’t like it when it’s directed at you huh?

I’m afraid this will just be the start :D

You reap what you sow

What are you talking about?
Score: 60 Votes (Like | Disagree)

Meandmunch
Apple should use their Trillion dollars and set up shop in another country or just buy or create their own. They need to be less dependent on Chinese manufacturing because this is only going to get worse.
Score: 54 Votes (Like | Disagree)

barkomatic
I don't think we can trust Apple's statement on this issue since the FBI/government could have ordered the affected companies to deny it ever happened for national security purposes.
Score: 40 Votes (Like | Disagree)

Do you live in China? Why are you so riled up over this?

Why do you take my criticism of apple and a ceo so personally? Why is that your first reaction? Am I going after a local mums and pops shop?

Liberals who defend trillion dollar valuation tech companies like they’re a precious startup, to no end disgust me. Even when they tow the line with China

DBZmusicboy01
I am not surprised if it’s true.
Business is businesse. All these companies are corrupted beyond imagined. Look at what Facebook did with our data selling it for profit.
Score: 19 Votes (Like | Disagree)
Read All Comments