Apple in late September registered new iPad models and a new Bluetooth device with China's Ministry of Industry and Information Technology (MIIT), which hints at an imminent release for new iPad Pro models and perhaps a new Apple Pencil.

According to MySmartPrice, Apple registered iPad model numbers A1876, A1980, and A1993 which correspond to previous iPad registrations that we saw Apple file in July with the Eurasian Economic Commission. The exception is A1993, which has not been seen in a prior filing. 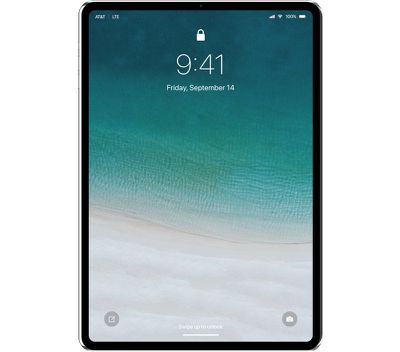 iPad Pro mockup by Álvaro Pabesio
The new model numbers do not correspond to any existing devices and likely represent unreleased iPad Pro models. Back in July, Apple also registered A1934, A1979, A2013, A2014, and A1985 with the ECC, representing new iPad Pro models set to be sold in countries that include Armenia, Belarus, Kazakhstan, Kyrgyzstan, and Russia.

That Apple is registering the previously spotted iPad models in a new country suggests a release could be imminent. With both new iPad models and new Macs on the horizon, we are expecting Apple to hold an October event, which could perhaps take place during the last week of the month based on the release date of the iPhone XR and what we know of past Apple events.

Rumors have suggested the new iPad Pro models could be sold alongside a second-generation Apple Pencil with AirPods-style no-contact pairing, and there is an unknown Bluetooth device in the MIIT filing.

The Bluetooth device, listed as just "Bluetooth device," features a model number of A2051, with no additional information available. It's not known what it is, but it could indeed be a new Apple Pencil based on the rumors we've heard.

Apple is expected to introduce new iPad Pro models in sizes similar to 10.5 and 12.9-inches, with larger displays featuring slimmer bezels and no Home button. All new iPad Pro models are expected to adopt Face ID and a TrueDepth camera system along with improved processors, better camera capabilities, and perhaps a USB-C port instead of a Lightning port.

Pelea
hopefully the new apple pencil starts at $199 instead of $99. the price is way too cheap at the moment for the best pencil on the planet!!
Score: 21 Votes (Like | Disagree)

If it's about profit margin, just charge enough for it to make it as profitable per unit sold.
Score: 17 Votes (Like | Disagree)

redheeler
An event later this month is looking likely at this point. Just wonder if there are any Mac filings to indicate a new iMac or Mac mini will be introduced at the event.
Score: 8 Votes (Like | Disagree)

I can sense the new iPad will be a monster seller.


Wait for the pricing . I sense a significant rise
Score: 8 Votes (Like | Disagree)

SoyCapitanSoyCapitan
I can sense the new iPad will be a monster seller.
Score: 7 Votes (Like | Disagree)

SCREW iPAD EVENT, THERE ARE ENOUGH NEW IPADS OUT THERE !