Over the past few months, Apple has been preparing itself for product launches later in the year by registering several new iPads, iPhones, and Macs with the Eurasian Economic Commission. The filings are legally required for any products that include encryption features and are to be sold in Armenia, Belarus, Kazakhstan, Kyrgyzstan, and Russia, making them good indicators of products coming down the line. 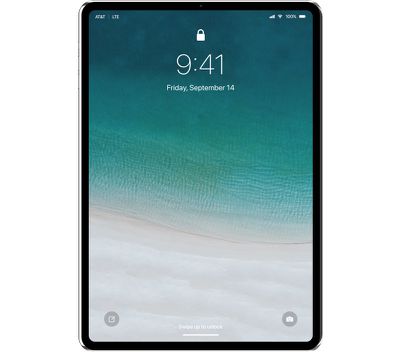 2018 iPad Pro concept by Álvaro Pabesio
Later this year we're expected to see a major update to the iPad Pro with design elements from the iPhone X, like slimmer bezels, faster processor, and a TrueDepth front-facing camera with Face ID support. This means that the 2018 iPad Pro models are also expected to drop support for the home button for the first time on Apple's line of tablets.

The 2018 iPad Pro refresh is predicted to come in two sizes, measuring 11 inches and 12.9 inches, according to recent report by Apple analyst Ming-Chi Kuo. With two size tiers and a Wi-Fi, Wi-Fi + Cellular, and potentially a special Cellular model for China, there would be just one model number left over from the seven EEC filings.

While this could be an additional model of the iPad Pro we don't yet know about, it could also relate to a model of iPad not in the Pro family, including the iPad mini 5. A rumor from May 2017 suggested the mini lineup was being discontinued, but over a year later Apple has yet to officially make such a commitment to ending the line.

Consomac's other findings relate to model numbers previously reported, including 11 model numbers for smartphones and five model numbers for laptops, two of which we now know were the 13-inch and 15-inch MacBook Pro with Touch Bar refresh launched yesterday. For MacBook, this leaves three other models with a potential launch in 2018, perhaps indicating cheaper, entry-level MacBooks without the Touch Bar.

Today's filings also include 11 existing iPhone models listed as running iOS 12, including the iPhone SE and iPhone X, two devices Apple has been rumored to possibly be discontinuing with the release of the new lineup. It's unclear, however, if their inclusion is confirmation that Apple will continue selling them.

Of course, it's difficult to obtain any information based solely on model numbers, so at this point those looking forward to new iPads and iPhones this year can at least know that the devices are a few months away.

DesertNomad
I really hope this is a mini 5. I'm a pilot and the mini is the perfect size to mount on the yoke of an aircraft... the other models are just too big. It is also the perfect size and aspect ratio to hold an approach plate. The whole pilot community here is carrying around iPad mini 4s and I'm sure we'd all like to see an upgrade.
Score: 16 Votes (Like | Disagree)

TMRJIJ
Apple is seriously rolling out some hardware this year.
Score: 9 Votes (Like | Disagree)

I really hope this is a mini 5. I'm a pilot and the mini is the perfect size to mount on the yoke of an aircraft... the other models are just too big. It is also the perfect size and aspect ratio to hold an approach plate. The whole pilot community here is carrying around iPad mini 4s and I'm sure we'd all like to see an upgrade.

I realize aviation is a tiny, tiny market and Apple will never release a product just for pilots, but iPad adoption was fast and widespread in this community (exceedingly high market share for iPad specifically). Probably more so than any other group I can think of.

I'm still using a Mini 2 which is just crawling along... but I can't bear to upgrade to a 4 until I know for sure a 5 is never coming. Even outside the cockpit it's the perfect size for reading, in my opinion.
Score: 8 Votes (Like | Disagree)

macpodman
I hope they don’t drop the iPad Mini. It’s the ideal size for reading eBooks.
Score: 7 Votes (Like | Disagree)
Read All Comments

Wednesday January 12, 2022 9:26 am PST by Joe Rossignol
Apple is widely expected to remove the notch on iPhone 14 Pro models, but there have been conflicting rumors about the new design. Early rumors suggested that Apple would adopt a hole-punch design with Face ID somehow moved completely under the display, and later it was rumored that there would be a pill-shaped cutout instead. Now, display industry consultant Ross Young has claimed that...
Read Full Article • 162 comments

Wednesday January 12, 2022 6:18 am PST by Joe Rossignol
iPhone 14 Pro models will feature a 48-megapixel camera, according to Taiwanese research firm TrendForce. Specifically, this refers to the rear-facing Wide camera, which is currently 12 megapixels on iPhone 13 Pro models. The addition of a 48-megapixel Wide camera on iPhone 14 Pro models has already been mentioned by multiple sources, including analyst Ming-Chi Kuo, who expects the upgraded...
Read Full Article • 88 comments

Tuesday January 11, 2022 1:39 pm PST by Juli Clover
If you're a regular internet user you've probably heard of popular web-based daily guessing game Wordle, created by Josh Wardle. The game, which is entirely free to play, was introduced last fall and has been spreading like wildfire. Wordle asks players to guess a five letter word by identifying which letters are in the word and are located in the right location. Players get six guesses per...
Read Full Article • 117 comments

Wednesday January 12, 2022 3:28 pm PST by Juli Clover
Apple in November settled a long-running lawsuit over employee bag checks, with the Cupertino company agreeing to pay $29.9 million to employees who were subjected to off-the-clock bag searches, and now details about the settlement are available on Apple's website. California employees first sued Apple in 2013, and in 2015, the case escalated into a class action lawsuit. Employees claimed...
Read Full Article • 155 comments