The United Kingdom's National Cyber Security Centre has backed Apple's and Amazon's denials of a Bloomberg Businessweek report that claimed Chinese spies planted tiny chips the size of a pencil tip on motherboards manufactured by Supermicro, which both Apple and Amazon used at one time in data center servers. 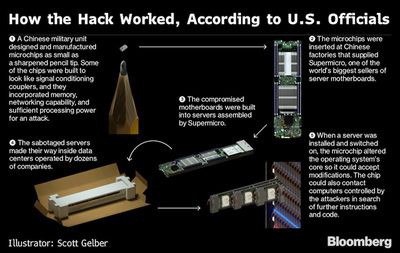 "We are aware of the media reports but at this stage have no reason to doubt the detailed assessments made by AWS and Apple," the agency, a unit of the GCHQ, said in a statement provided to Reuters today.

"The NCSC engages confidentially with security researchers and urges anybody with credible intelligence about these reports to contact us," it added.

Apple was a Supermicro customer for several years, using its servers to power the likes of iCloud, Siri, and the App Store, although it severed ties with the company in 2016 due to a previously-reported and allegedly unrelated incident in which Apple discovered an infected driver on a single server in one of its labs.

Bloomberg Businessweek yesterday reported that Apple discovered the suspicious microchips around May 2015, after detecting odd network activity and firmware problems. Two senior Apple insiders were cited as saying the company reported the incident to the FBI, but kept details tightly held.

One government official cited in the Bloomberg Businessweek report said China's goal was "long-term access to high-value corporate secrets and sensitive government networks." No consumer data is known to have been stolen, the report added, but the extent of the alleged attack appears to be unclear.

In response to Bloomberg's latest version of the narrative, we present the following facts: Siri and Topsy never shared servers; Siri has never been deployed on servers sold to us by Super Micro; and Topsy data was limited to approximately 2,000 Super Micro servers, not 7,000. None of those servers has ever been found to hold malicious chips.

Apple later clarified that it is not under any kind of gag order or other confidentiality obligations after speculation mounted.

cmaier
But how do all these detailed denials and factual analyses override my moronic conspiracy theory that says everyone is lying except the source who told businessweek the truth? Clearly the first amendment is a sham and the US government is compelling Apple to lie instead of allowing them to merely keep their mouths shut. And certainly these chips have magic superpowers and can do things that lib tard chips can’t do. And certainly the only reason Apple is lying is because they are controlled by a China and don’t worry about the SEC fine when the truth comes out. Oh, wait. That’s two contradictory reasons. Well that just somehow proves my idiotic point.
Score: 23 Votes (Like | Disagree)

alphaod
This is ridiculous. These "U.S. Officials" are just downright neanderthals if they think you can just replace any chip. They don't even understand how a motherboard works and the amount of work it would take to rework the traces on the motherboard to accommodate any modifications like this. You'd be crazy not to notice.
Score: 16 Votes (Like | Disagree)

Let's put it this way: if you were going to put this magic chip onto a motherboard, what would it be connected to? And how would you hide it? Circuit board design isn't a random tangle of leads wandering around the board. They need to be where they are due to routing and physics. For network access, you need to connect that chip to something that is connected to a network. And power. And a clock. And if it does all of the stuff it says in the article it needs direct lines into the CPU, network card, and possibly the north/southbridge. That means a whole bunch of traces that magically appeared on a motherboard - and nobody noticed.

Yeah, right. That's complete BS. Even a lights-out manager (LOM), which allows access when the power is out, requires a whole lot of connections. Noticeable connections. You can't really hide this kind of stuff.
Score: 15 Votes (Like | Disagree)

jjhny
We run a server. Incredible amount of hack attempts logged. Mostly always from China. Probably the biggest cyber threat in the world.

I'm still trying to figure how I can block any IP from China pre-emptively.
Score: 14 Votes (Like | Disagree)

This is ridiculous. These "U.S. Officials" are just downright neanderthals if they think you can just replace any chip. They don't even understand how a motherboard works and the amount of work it would take to rework the traces on the motherboard to accommodate any modifications like this. You'd be crazy not to notice.

Actually many chips on the board communicate using a standard bus system (I2C / SMBUS), so you could in theory attach anywhere on the bus to tap into it. There are reasons this story is implausible, but this isn't one of them.
Score: 11 Votes (Like | Disagree)
Read All Comments

Sunday January 16, 2022 3:37 pm PST by Joe Rossignol
A bug in WebKit's implementation of a JavaScript API called IndexedDB can reveal your recent browsing history and even your identity, according to a blog post shared on Friday by browser fingerprinting service FingerprintJS. In a nutshell, the bug allows any website that uses IndexedDB to access the names of IndexedDB databases generated by other websites during a user's browsing session....
Read Full Article • 230 comments