Apple to Invest in Mangrove Forest Restoration Project in Colombia

Apple has announced it will invest in a mangrove tree restoration project for a 27,000-acre forest in Colombia, as part of a broader effort by the company to achieve carbon neutrality (via Fast Company).

Apple VP of environment, policy, and social initiatives Lisa Jackson gave details of the investment at the Global Climate Action Summit in San Francisco, but stopped short of disclosing how much cash Apple intends to earmark for the project, which is being undertaken in partnership with the non-profit Conservation International. 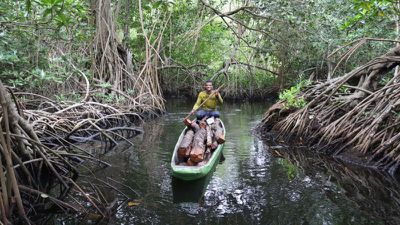 "These forests are critical because they're one of nature's most important tools in the battle against climate change – they can absorb and store up to ten times more carbon than a terrestrial forest," Jackson told the audience.

The project will involve tree-planting in degraded areas of the Colombian forest and tree preservation, which should help capture an estimated one million metric tons of CO2 emissions over its lifetime. Projections over the first two years indicate 17,000 metric tons in reduced emissions.

That's the same amount of emissions generated by the cars that will update Apple Maps over the next decade, making the program carbon neutral for the company, notes Fast Company.

According to M. Sanjayan, CEO of Conservation International, mangrove trees are excellent absorbers of carbon and are able to store carbon dioxide in their leaves and branches, as well as siphon off the gas into surrounding soil and sediment through vast underwater root systems.

Mangrove trees "have the densest carbon storage of any habitat on Earth," said Sanjayan. "If you want to actually change the thermostat of the world in your lifetime, then ending the destruction of mangroves and restoring them is one of the biggest things you can do."

Conservation International has calculated how much "blue carbon" the trees sequester underwater, which will allow the project to quantify the trees' ability to act as "carbon sponges".

"By investing, [Apple] opened the door for others to also think about blue carbon as a viable way to sequester carbon and reduce emissions globally," said Sanjayan.

Back in 2015, Apple partnered with the Conservation Fund to acquire over 36,000 acres of working forest in Maine and California, ensuring the maintenance of the forests and preserving the supply of raw materials for paper. Later that year, Apple committed to protecting one million acres of forest in China.

Underlining its environmental commitments, Apple announced in April that its global facilities, including retail stores, offices, data centers, and more, are powered with 100 percent clean energy.

Climate change is being used a distraction

Nobody is claiming climate change is the only environmental crisis facing our planet, but if rapid climate change occurs, it will compound all the issues you mention and render them moot. It’s true that the biosphere is currently under an enormous amount of stress, but rapid climate change will make it impossible for already stressed ecosystems to adapt or adjust.
Score: 12 Votes (Like | Disagree)

tennisproha
Go Apple! This looks like a thoughtful initiative so I’m thankful to Apple for doing it. However, we have a lot more to do to limit climate change and not enough time left to do it. Please pressure your politicians to act.
Score: 10 Votes (Like | Disagree)

The truth about Conservation International:
http://www.wrongkindofgreen.org/category/organizations/conservation-international/

Thanks MR for this greenwash article!

Your beef is that Exxon donated to them as well? Or that companies that donate to them aren't obligated to curb their emissions?

I honestly don't see how any investment back into Earth isn't a positive for it - whether through credit or by reduced emissions - given the amount of damage happening to it at any given moment.

We need rapid change, soon. We've got to start somewhere and if money from those who are doing the damage can be used to help work against it in any capacity, that means one less dollar for them to use to hurt the earth, too.
Score: 8 Votes (Like | Disagree)

More eco distractions for the company that’s having trouble focusing on its own announced products.

Or you could, you know, just skip over the articles that aren't on topics that interest you. You are going out of your way to read a site that dedicated to reporting every story they can find about Apple.

In protest we should all pledge to hinder the green movement, until Apple patches the gaping holes in the Mac product line. It’s time to set our tuna nets to 11 and clear cut our way back to real desktop computers.

Please stop actively trying to be a horrible person. You look awfully petulant and childish throwing your toys out of the pram. Not everything in the world is about whether your phone/computer has this button or that button. Apple is focused on making good products. As a minuscule side project they're doing a tiny bit to help the planet. Stop trying to hold the planet hostage until you get your new shiny toy.
Score: 5 Votes (Like | Disagree)