Over the weekend, mobile leaker Benjamin Geskin reposted a series of images supposedly showing "prototypes" of Apple's forthcoming 6.1-inch LCD iPhone in three colors. The images were in fact first shared by Slashleaks on September 6, when they were described as "clones" of Apple's upcoming mid-tier LCD iPhone.

Despite that, on Sunday Geskin re-shared an earlier tweet of his linking to the original Slashleaks page, and claimed the dummy/clone images were in fact "the real deal", without offering any evidence to substantiate the new claim.

Whatever the truth is behind these images, they've become a topic of online discussion, so we're covering them here for completion.

Rumors have been running for some time that Apple's more budget-friendly LCD iPhone will launch in several colors, with Apple analyst Ming-Chi Kuo predicting in July that gray, white, blue, red, and orange colors would be available. 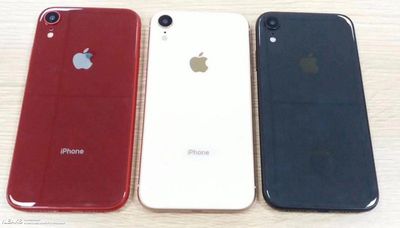 The red color shown in the images appears similar to Apple's special PRODUCT(RED) iPhone editions, which for the last two years have only become available for select models midway through their first year of availability.

One of the images of the alleged "prototypes" also shows the 6.1-inch LCD iPhone with a dual-SIM card slot. Again, previous rumors have suggested that a dual-SIM version of the LCD iPhone will be available in select regions.

Lastly, the cases in the images look to have glass backs surrounded by aluminum edges, in contrast to the more expensive-to-manufacture stainless steel finish used in last year's iPhone X.

It's not long now before we'll know for sure what Apple has planned for its 2018 iPhone lineup. Apple's "Gather Round" media event takes place on Wednesday, September 12, and you can find all the coverage here on MacRumors.

I'm not a fan of the blue/space gray. Give me piano black, a dark/royal purple and a sapphire blue.

That's a lot of phones. You must have big pockets.
Score: 8 Votes (Like | Disagree)

recoil80
It is not easy to judge by a picture, even if those are real iPhones, but I don't like any of the colors.
I love the red iPhone 8, but it seems like a different shade. And I don't like the blue either, I'd expect something more vibrant like colors they offered for the iPod touch.
Score: 3 Votes (Like | Disagree)

To me, ‘Pro’ is possibly the most unfitting name for an iPhone, just because it’s primarily a communication device first.

In Apple parlance, Pro doesn't necessarily equate to some specific "professional use case", it's just their top-of-the-line model in a product line ... not to mention, the vast majority of my phone communication is a professional capacity ;)

I don’t get why the entry level phone would be the middle sized phone. I would think that entry level buyers would want the smaller phone.

I'd say size doesn't really correlate to price point, and maybe there's enough data to show there's more favor for larger-ish sized devices (in general), so a single low price model should favor that FF[?] You know if there's only one option, hedge your consumer bet :)
Score: 2 Votes (Like | Disagree)

44267547
I do like the acrylic color pattern with the blue and red, the white seems very Apple-ish.