Apple gave a straight to series order for a half-hour scripted comedy show created by Rob McElhenney and Charlie Day, reports Variety. The show is said to be set in a video game development studio.

Rob McElhenney and Charlie Day are best known for popular comedy show "It's Always Sunny in Philadelphia," which the duo have starred in since 2005 alongside Glenn Howerton, Kaitlin Olson, and Danny DeVito. 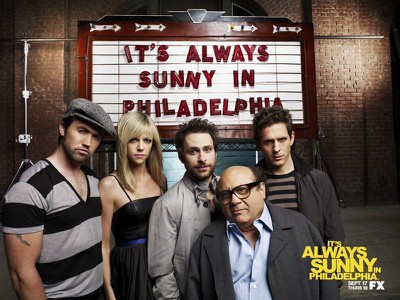 McElhenney and Day will write and executive produce the series, and McElhenney is set to be one of the show's stars.

Apple has inked deals for more than a dozen TV shows, including several other comedy shows. A "You Think It, I'll Say It" TV show based on Curtis Sittenfield's short story collection is in development, as is "Central Park," an animated series developed by Loren Bouchard.

A full list of all of the TV shows that Apple has in development is available in the Original Content section of our Apple TV roundup.

Rumors suggest the first of Apple's TV shows could debut in the spring of 2019, with Apple perhaps planning to distribute them via a new streaming service.

ChazSch
IASIP is one of the funniest shows ever. Great job guy!

Apple Knowledge Navigator
I prefer that other comedy they’re into, Where’s My Mac Mini. I hear Tim wrote it himself!
Score: 9 Votes (Like | Disagree)

velocityg4
Alright Apple if you want to get my views. Bring back "Firefly". Browncoats Unite!

I'd also settle for "Dark Matter".

Anyways I assume the writers are from IASIP. If that's the case I doubt I'd watch this show either. So far I haven't seen any show mentioned for Apple's platform which looks compelling.

When I saw "Planet of the Apps" first announced. That was the only time my interest was peaked. Then I realized it wasn't "Planet of the Apes". I misread the title.
Score: 7 Votes (Like | Disagree)

You'd come to Apple for TV if they had shows you wanted to watch. But they don't, so you don't. That doesn't mean it will never change.

I come to Apple for my computing needs, which apparently their do not care for :(

Apple wants family oriented shows (no problem with that), however Disney already does this. Apple has a stake in Disney, just pair with them and problem solved, you have content. A joint venture where both benefit equally, Apple wants original content work with Disney rather than reinvent the wheel. Is Disney getting into mobile devices, computer and music or is Apple heading down Sony’s path.
Score: 5 Votes (Like | Disagree)

and 1989 others
I kind of feel sort for the writers and producers of the shows Apple keeps acquiring. Sadly they will never be a commercial success on the Apple platform. Personally I don't come to Apple for TV streaming. I use Netflix and Amazon. I use iTunes for tunes and movies. They're flogging a dead horse here.
Score: 4 Votes (Like | Disagree)

IASIP is one of the funniest shows ever. Great job guy!

is your cat too noisy?

Friday July 23, 2021 9:37 am PDT by Juli Clover
Apple is developing an external display that includes an A13 chip with Neural Engine, according to a new rumor from 9to5Mac. The A13 chip with Neural Engine would presumably serve as an eGPU, though details are light at this time. Having a CPU/GPU built into the external display could help Macs deliver high-resolution graphics without using all the resources of the computer's internal chip....
Read Full Article • 231 comments