Steven Troughton-Smith today shared new evidence in iOS 12 that Apple is close to launching an iPad with Face ID.

The well-known developer discovered an iPad-ready implementation of AvatarKit, the software framework that Apple's Animoji feature relies on. 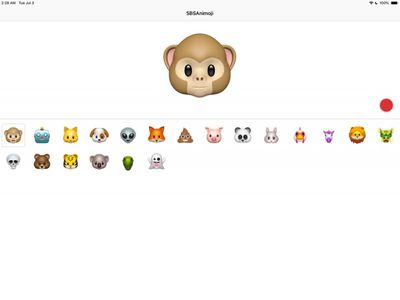 Previously, only the iPhone X firmware has included the AvatarKit framework, which requires a TrueDepth camera to perform real-time face tracking, so the fact that Apple has included it in the iOS 12 beta offers another indication that an iPad with similar hardware is just around the corner.

The first hints in iOS 12 that Apple is readying a new-look tablet came in the form of tweaked iPad gestures that are similar to gestures on the iPhone X. These point to next-generation tablets with a notch-style layout with a TrueDepth Camera System and no Home button.

Indeed, rumors suggest Apple is working on a new high-end iPad Pro for release this year that will adopt many of the design elements that the company introduced with the iPhone X.

The device is said to feature slimmer edges, a faster processor, a custom Apple-built GPU, and the all-important TrueDepth camera with support for Face ID facial authentication.

iPad Pro concept by Álvaro Pabesio
Taiwanese site Economic Daily News has suggested Apple will introduce an iPad Pro with a display that measures in at approximately 11 inches, which is in line with reports suggesting the device could have slimmer bezels.

The thinking behind this is that a new iPad Pro could include the larger screen size without increasing the physical dimensions of the tablet.

According to Bloomberg, Apple is said to be aiming to introduce the new iPad "a little more than a year" after the last iPad Pro update, suggesting it will see a launch sometime around September of 2018.

TF International Securities analyst Ming-Chi Kuo claims the iPad Pro will be released sometime in the third quarter of 2018, which also indicates a September launch.

recoil80
While it makes sense to have FaceID on the iPad I hope they won't design it with the notch. And FaceID ought to work on all orientations since a lot of people use their iPad in landscape mode.
Score: 17 Votes (Like | Disagree)

lambertjohn
Could care less. My 10.5 Pro is everything I could ask for in an iPad. Fast as hell, lightweight, fabulous screen, great camera, tons of memory, and a fingerprint reader, which I prefer over Face ID. I'll be keeping my 10.5 Pro for many years to come.
Score: 11 Votes (Like | Disagree)

I regret buying the iPhone 10. FaceID alone is a backwards step from a fingerprint scanner. The fingerprint scanner just works more often and in more scenarios than FaceID, period. For non-iPhone 10 users, I can't explain just how annoying and frustrating face ID is to the point that it detracts from the user experience. I really hope they do an under the glass scanner like other manufacturers are doing, as well, but I wont hold my breath.

I don't really care that much about Face ID but I would love an iPad with smaller bezels.

Face ID has been flawless, and a much more natural motion / interface in my experience and honest “opinion”.
Score: 9 Votes (Like | Disagree)

NovemberWhiskey
FaceID is going to be a huge improvement for the iPad. TouchID on the iPad was always clumsy and awkward. The home button was too, but at the time there was no better option.

This version looks like a great one, but every time I get an iPad, I really find it redundant when I have my iPhone and MBP. Since I have the Plus model phone, I find myself browsing on it when I don't want to use the MBP. And I cannot fathom why iPad still does not have all the apps iPhone does. Not just stock Apple apps like calculator, but third party chat apps as well. It really prevents you from using the iPad over the iPhone, and when you are on the iPad, may as well get on the MBP to get the full experience.

Being a sucker tho, I'll prob still buy this version to check it out. It just looks too sleek.

I can't wait until FaceID makes it to the MBP. That will be fantastic.
Score: 8 Votes (Like | Disagree)

Could care less. My 10.5 Pro is everything I could ask for in an iPad. Fast as hell, lightweight, fabulous screen, great camera, tons of memory, and a fingerprint reader, which I prefer over Face ID. I'll be keeping my 10.5 Pro for many years to come.

Who are you trying to convince, us or yourself? Sounds like you're upset that your device is about to become old technology. No real reason to come into this thread and advertise how much you "don't care" (it's quite obvious you do) otherwise.
Score: 6 Votes (Like | Disagree)
Read All Comments