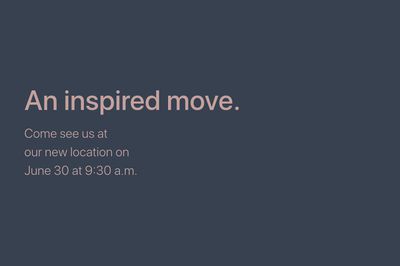 The new location is a standalone structure and will include all of the highlights and amenities of Apple's current crop of next-generation retail stores. Reports from GeekWire indicate the store takes up about 14,000 square feet of a former parking lot that measures 23,000 square feet. Of that amount, 8,000 square feet will be dedicated to a sales floor and sit-down areas for Today at Apple sessions.

Photo of Apple University Village taken by Nat Levy via GeekWire
On the same day, Apple has also announced its location in Palo Alto, California will see a grand reopening at 10:00 a.m. local time this Saturday. This location originally closed for renovations just over a month ago on May 13.

In an interview at Cannes Lions last week, Apple senior vice president of retail Angela Ahrendts said that "retail isn't going away" or "dying," but it will have to "evolve" as time passes. In its own efforts to evolve retail, Ahrendts mentioned that Apple tries to "humanize technology" with next-generation layouts that emphasize communal gathering and encourage interactivity during Today at Apple sessions.

ZMRoach
I've been patiently waiting for the U-Village store to make the move. The current store, though larger than a lot of the other ones I've been to, is obscenely busy all the time so there's nearly no room to walk.
Score: 2 Votes (Like | Disagree)

The name “Apple University Village” is a great example of why the word “Store” should have never been removed from the name.

Removing “Store” was the decision made by the clueless Angela Ahrendts, who was hired by the clueless Tim Cook. If Cook actually had a clue, he would've done everything he could to rehire Ron Johnson.

Well, I agree with your view of Angela Ahrendts. The Apple Watch rollout was a debacle of epic proportions and I still burn at the move of an Apple innovation being a viewed as a fashion statement rather than a fumctional device with beautiful form. Waaay too much focus on cases and bands, and the manadatory combinations were restrictive and ridiculous. The Apple Stores added a new elitist air with the watches under glass and appointments for ‘try ons’. From the moment, the watch came out, I was pretty sure its driving force would be health applications, not the Hermès bands.
Score: 1 Votes (Like | Disagree)

The name “Apple University Village” is a great example of why the word “Store” should have never been removed from the name.

Removing “Store” was the decision made by the clueless Angela Ahrendts, who was hired by the clueless Tim Cook. If Cook actually had a clue, he would've done everything he could to rehire Ron Johnson.

Monday September 26, 2022 7:34 am PDT by Sami Fathi
Today marks exactly two weeks since Apple released iOS 16 to the public. Besides the personalized Lock Screen, major changes in Messages, and new features in Maps, the update has also seen its fair share of bugs, performance problems, battery drain, and more. After major iOS updates, it's normal for some users to report having issues with the new update, but such reports usually subside in...
Read Full Article • 208 comments