Angela Ahrendts Talks Apple Retail in New Interview: 'Retail is Not Dying, But it Has to Evolve'

Apple senior vice president of retail Angela Ahrendts gave a new interview today at Cannes Lions, an annual international festival in France that celebrates individuals and companies in creative spaces. During her talk, Ahrendts discussed a variety of topics related to Apple and its pivot away from retail "stores" over the last few years to become community gathering places (via NBC News). 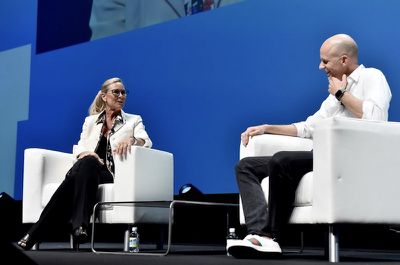 Thank you to the creative community who joined us at #CannesLions today to hear about #TodayatApple and how our retail experience inspires learning, unlocks creativity and encourages human connection. pic.twitter.com/64i4NL9SeY — Angela Ahrendts (@AngelaAhrendts) June 20, 2018

Ahrendts' discussion also included Apple vice president of marketing communications Tor Myhren, and the SVP of retail explained that Apple's approach is to be "in the human business" and to "humanize technology."


I love the creative arts... that's kind of when we came up with the tagline: maybe we're in the human business. Maybe the largest tech company has these 65,000 kids and maybe it's our job to humanize technology.

Looking to the future of retail in general, Ahrendts mentioned numbers from an analytic firm that suggest while the majority of shopping will move online, many customers will still venture out to physical locations to finalize a purchase. This means that shoppers will use apps and online websites to research products and items, and perhaps reserve them for in-store pickup, much like Apple already does today.

You have your instincts and you use a lot of smart outside guys, and the smart outside guys they don't say retail is dying. They say digital is gonna grow at three times the rate of physical, but in the next five years... 75 percent of people will shop online, shop to learn [about what they want to buy], but 75 percent of business will still be done in physical stores.

Because of this, Ahrendts explained that "retail isn't going away" or "dying," but it will have to "evolve" as time passes. Apple has already made moves to change up Apple retail locations with next-generation layouts that emphasize communal gathering and encourage interactivity during Today at Apple sessions. This plays into another of Ahrendts' talking points in the interview, when she said, "I think [retail] has to serve a bigger purpose than just selling."

Some really interesting insight on the future of retail from Apple's @AngelaAhrendts! For more expert insights and sign up for a #CannesLions Digital Pass, available here https://t.co/VB1kN9uzpt pic.twitter.com/AsBKbSURe2 — Cannes Lions (@Cannes_Lions) June 20, 2018

Ahrendts also discussed an internal social network that Apple calls "Loop," which was built for the company to measure how well it is doing in its retail mission to keep customers happy, accomplished through surveying both customers and retail employees. Loop is examined by Ph.D. students and results in data that helps Apple executives "improve systems" surrounding its retail business.

“They are not hired to sell," she said. "There is no commission, no quotas. What we’ve tried to do is keep uniting them around the big vision and the impact we want to make.”

Ahrendts routinely discusses Apple's next-generation retail plans in interviews, and last year even appeared onstage at the iPhone X event to briefly talk about retail and Today at Apple sessions. Shortly following that September event, Ahrendts climbed to the 13th spot on Fortune's Most Powerful Women list for 2017, jumping from 14th in 2016 and 16th in 2015.

oneMadRssn
Retail selling products is dying. Almost all stores that sell "things" around my area have closed. The exceptions are stores that sell big things, expensive things, and perishable things, like furniture stores, art galleries, and groceries.

Instead, main street and malls are now full of services - hair and spa, banks, restaurants, escape the room type of activities, etc. These don't sell a thing, but rather sell a service that cannot be delivered over the internet.

I think the reason Apple has succeeded in retail is because they're stores primarily provide a service. Everytime I'm in an Apple store, 90% of the people there are for a genius appointment or a training of some kind. They buy accessories while there sometimes.
Score: 23 Votes (Like | Disagree)

6502
Angela, you've done very well at Apple raking in millions while doing little more than maintaining the status quo that Ron Johnson established. How about you champion your AppleStore employees and pay them a decent livable wage?
Score: 15 Votes (Like | Disagree)

ThunderSkunk
Turning your retail space into a cultural hangout is what high-end bike shops traditionally do when they don't sell enough high margin/low volume product to make ends meet. Then 2 out of 3 run out of investment capital in a few years and go away, because ultimately you can't make the high cost of retail space pay for itself as a happytime PR exercise. All of that is running away from the problem. When people want to go somewhere to hang out, they go to parks and beaches and cafes. The era of Malls as popular temples of consumer culture ended 2 decades ago.

Fixing the problem means filling the store with products people want to see, touch, experience & desire. Make products that do that again, and fix the problem.
Score: 14 Votes (Like | Disagree)

Denmac1
Sure, retail could die if you don't have anything new and exciting or of relevance to offer.
Score: 12 Votes (Like | Disagree)

BornAgainMac
She has to look like she is working so that she still has a job at Apple.
Score: 10 Votes (Like | Disagree)

avanpelt
I get what Angela's trying to do in terms of making the Apple Store a "destination", but I just don't see it being successful. Foot traffic at most malls is way down compared to five years ago. I don't see Apple being able to reverse that trend.

I live 15 minutes from one of the biggest malls in the Atlanta Metro area. Even though I'd say foot traffic is down at that mall, if I need to go to the Apple Store, I still have to park and then it takes five to ten minutes to walk to the Apple Store if I park at the closest entrance. There's no way I'm doing that to go have coffee and get an Apple training session when I can sit at home, drink my own coffee, put my feet up, and watch YouTube videos that will show me the same thing I'd learn at the Apple Store. I go to the Apple Store for one reason and one reason only: hardware repair that I can't do myself.
Score: 8 Votes (Like | Disagree)
Read All Comments