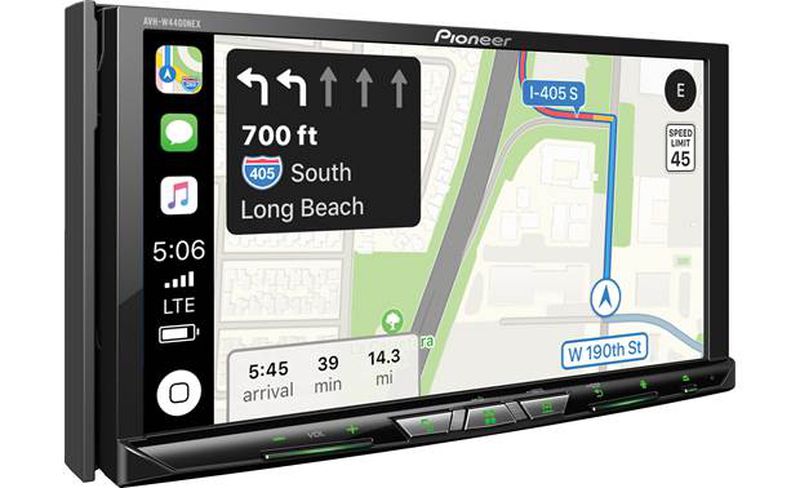 AVH-W4400NEX
Introduced at CES 2018 in January, product listings have since confirmed that Pioneer's latest AVH-W4400NEX and AVIC-W8400NEX receivers are capable of not only wired and wireless Android Auto, but also wired and wireless CarPlay, enabling drivers to connect an iPhone to either receiver via Bluetooth and Wi-Fi.

Receivers with wired implementations require connecting an iPhone with a Lightning to USB cable to access CarPlay functionality.

The lower-end AVH-W4400NEX features a double-DIN design with a seven-inch resistive touchscreen. The receiver has a suggested price of $699.99 in the United States through resellers such as Crutchfield and Sound of Tri-State. It's also available for C$899.99 in Canada via Best Buy's online store.

The higher-end AVH-W8400NEX features a double-DIN design with a seven-inch capacitive touchscreen. The receiver has a suggested price of $1,199.99 in the United States through resellers such as Crutchfield and Sound of Tri-State. It's also available for C$1,399.99 in Canada via Best Buy's online store.

Alpine released the first aftermarket wireless CarPlay system in June 2017. Its iLX-107 receiver features a seven-inch capacitive touchscreen and is available for a suggested price of $900 in the United States. Wireless CarPlay is also available in select new vehicles from BMW, and Mercedes-Benz starting soon.

Pioneer has also released some wireless CarPlay receivers in Europe, according to the blog CarPlay Life. Thanks to MacRumors reader Dean Cobb.

The $300 price difference between the two receivers largely relates to the type of touchscreen used.

It's really disingenuous to charge an extra $500 just so your customers don't have to use a crappy display technology from 12 years ago. You can buy an entire 2018 iPad for less than the upcharge for a capacitive display. And no doubt said displays are probably some really awful 640x480 or 720x480 resolution. They don't even mention the display resolution so I imagine the worst, otherwise they would list it, and in the past displays on these receivers have been pretty awful.

Customers buying a modern system like this don't need all that legacy garbage. They want to route their phone through their car and use it as the hub for all data connections and streaming. I think even $599 is kinda overpriced for something that is basically just a big display for your phone but I get it, you guys suck and want to milk people who have older cars. OK. But you don't have to be a jerk and ship a product in 2018 that uses a resistive display. That's just customer hostile.

I think I'm about done with waiting for a CarPlay implementation that doesn't suck. I seriously just want to buy a 2018 iPad and mount that in the middle of my dash. Holy crap. I'm not salty or anything…hah.
Score: 8 Votes (Like | Disagree)

diddl14
Why on earth do these things still come with cd/dvd drives? :confused:
Score: 7 Votes (Like | Disagree)

OldSchoolMacGuy
Cool deal but wireless CarPlay is a huge battery drain. You nearly need to plugin your phone to keep up. A wireless charger will allow you to see just a small loss after a drive to work but still won't prevent drain.

Pioneer is known for dropping support and not updating after a short period of time. They stopped issuing firmware updates for the AppRadio 3 just 4 months after release. All future updates to iOS were a crapshoot.
Score: 6 Votes (Like | Disagree)

I understand the appeal of a capacitive touchscreen, but there is a glare issue. One of the Pioneer head units I have is impossible to see when the sun is coming into the car from certain angles.

Many resistive touchscreens have a matted screen that doesn't reflect like the capacitive ones.
Score: 5 Votes (Like | Disagree)

minimo3
Dashmount: $12. Plus you get full functionality instead of being limited to Apple maps and a few music apps.
Score: 4 Votes (Like | Disagree)

jeff275
Wouldn't a resistive screen potentially be an advantage since you could use it with gloves? I never had a problem with resistive screens back in the day.
Score: 4 Votes (Like | Disagree)
Read All Comments

Tuesday April 7, 2020 10:06 am PDT by Juli Clover
Apple today released iOS and iPadOS 13.4.1, minor updates that come two weeks after the release of iOS and iPadOS 13.4, major updates that introduced iCloud Folder Sharing, a new Mail toolbar, trackpad support for the iPad, and more. The iOS and ‌iPadOS‌ 13.4.1 updates are available on all eligible devices over-the-air in the Settings app. To access the updates, go to Settings > General...
Read Full Article • 65 comments