Apple today released watchOS 4.3, the third major update to the watchOS 4 operating system that runs on the Apple Watch. watchOS 4.3 comes more than three months after the release of watchOS 4.2, the last major update that brought Apple Pay Cash. 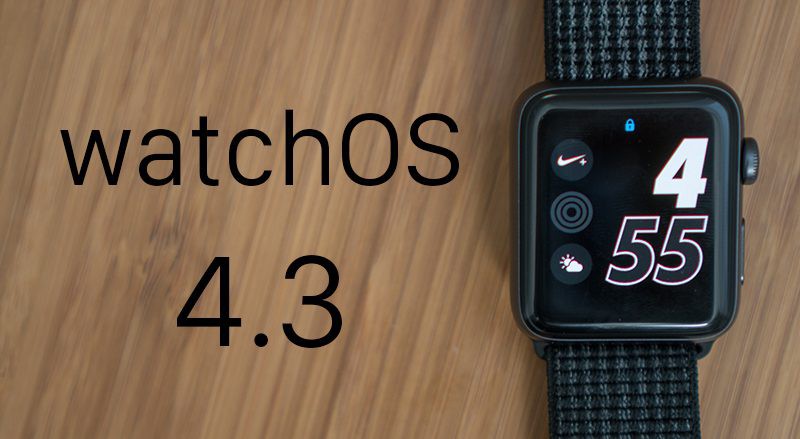 watchOS 4.3 can be downloaded through the dedicated Apple Watch app on the iPhone by going to General --> Software Update. To install the new software, the Apple Watch needs to have at least 50 percent battery, it needs to be placed on a charger, and it needs to be in range of the iPhone.

watchOS 4.3 introduces support for Nightstand mode when the Apple Watch is positioned in a portrait orientation, a feature that was previously only available when the watch was placed in landscape orientation on its side.

Subscribe to the MacRumors YouTube channel for more videos.
Today's update also reintroduces a much-desired feature that allows music playing on the iPhone to be controlled using the Music app on the Apple Watch.

In previous versions of watchOS, starting with watchOS 4, the Music app could only be used to control music playing on the watch itself. watchOS 4.3 returns pre-watchOS 4 functionality and once again allows you to select the music playing on your iPhone from the Apple Watch. With watchOS 4.3, you're also able to control playback and volume on the HomePod using the Apple Watch.

Other new features in watchOS 4.3 include a new charging animation when the Apple Watch is placed on the charger and a new app loading animation when opening up an app. You'll also now see your Activity data on the Siri watch face, and the battery complication more accurately reports battery life.

peglegjack
Will this fix the problem with the Workout app freezing?
Score: 9 Votes (Like | Disagree)

Will this fix the problem with the Workout app freezing?

Will this fix the problem of me freezing while using the Workout app? ;)
Score: 6 Votes (Like | Disagree)

apolloa
Wonder if this will fix the lag in the exercise app and the none existent breath reminders?
Score: 4 Votes (Like | Disagree)

Cinab1mt
My Series 3 seems much snappier, I mean its noticeably quicker! Anyone else agree? Maybe Apple finally figured out not to rush updates?
Score: 4 Votes (Like | Disagree)

How well does the series 0 work with this? I have issues since watchOS4. One could think planned obsolescence. In particular when I start a workout and than try the watch to play music to my Beats X.

It's the bomb. It's so much faster and snappier.
Score: 4 Votes (Like | Disagree)

It's the bomb. It's so much faster and snappier.

I agree. Much faster on series 0.
Score: 2 Votes (Like | Disagree)
Read All Comments

Thursday May 28, 2020 8:13 am PDT by Eric Slivka
With the release of macOS Catalina 10.15.5 and related security updates for macOS Mojave and High Sierra earlier this week, Apple is making it more difficult for users to ignore available software updates and remain on their current operating system versions. Included in the release notes for macOS Catalina 10.15.5 is the following:- Major new releases of macOS are no longer hidden when...
Read Full Article • 260 comments