watchOS 4.2 can be downloaded through the dedicated Apple Watch app on the iPhone by going to General --> Software Update. To install the new software, the Apple Watch needs to have at least 50 percent battery, it needs to be placed on a charger, and it needs to be in range of the iPhone. 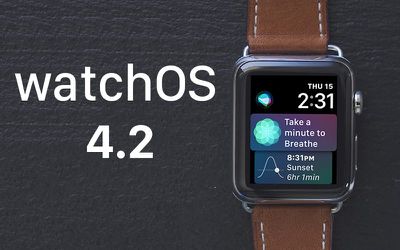 The watchOS 4.2 update introduces support for Apple Pay Cash, Apple's new peer-to-peer payments service designed to let users transfer money to one another. Apple Pay Cash, which is also available in iOS 11.2, can be used to send and receive money through the Messages app on the Apple Watch. Apple Pay Cash started rolling out yesterday and is officially available for all U.S. users as of today.

Subscribe to the MacRumors YouTube channel for more videos.
Payments are sent using a linked credit or debit card (or an existing Apple Pay Cash balance), while money received is stored within a new Apple Pay Cash card that's available in the Wallet app. For more on Apple Pay Cash, make sure to check out our how to.

Along with support for Apple Pay Cash, the watchOS 4.2 update also adds support for HomeKit sprinklers and faucets, plus it introduces a new workout type that allows third-party apps to track distance, average speed, number of runs, and elevation descended for downhill snow sports with Apple Watch Series 3.

IxRich
Everyone or everyone in the US? At least try to remember that there's an entire planet outside the USA.
Score: 26 Votes (Like | Disagree)

Asking for clarity. How about you get over it
Score: 24 Votes (Like | Disagree)

MacknTosh
And by ’available for everyone’, you naturally mean ‘available for US customers’ (which for some people means the same thing).
Score: 16 Votes (Like | Disagree)

Jaylay14
They need to bring back the way you could browse through your music that is on your iPhone! I miss it so much :(
Score: 13 Votes (Like | Disagree)

cal6n
That’ll be three hours of my life gone while it downloads and installs. ☹️
Score: 9 Votes (Like | Disagree)
Read All Comments