Facebook today announced the rollout of a new feature in Messenger called "Admin Privileges." With this toggled on, the company said that it will give specific users in a group chat "more control" over who partakes in the chat, and should help boost the app's privacy.

If you have admin privileges you'll be able to approve or decline new members before they join the chat, remove members already in a chat, and promote or demote any other person as an admin. The company said that the feature should help large groups who need to get in touch but may not be connected to on Facebook, like for a friend's surprise party. 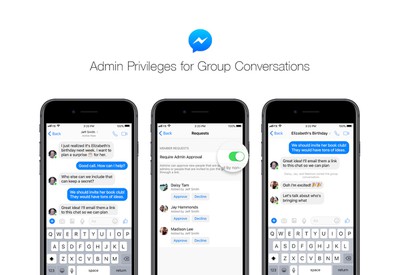 There are also new joinable links that any member can create and send out to potential new members, which an admin will then be able to approve. These admin privileges will be turned off by default:

The great thing about admin privileges in Messenger is they work in the background; if your group chat doesn’t need that level of control, it won’t get in the way of your group messaging. You’ll have the option to decide if you’d like admin approval for approving new members, but this preference is off by default in your group chat settings.

Today's Facebook Messenger update launches at the same time that Facebook is facing immense scrutiny for its involvement with consulting firm Cambridge Analytica, which itself has been tied to President Trump's 2016 election campaign. According to recent reports, the firm improperly amassed information from 50 million Facebook users without their consent and used that data to "target messages to voters."

In the wake of these reports, investigations have been opened into Facebook's actions and several politicians have asked Facebook CEO Mark Zuckerberg to testify about the events. A new "#DeleteFacebook" campaign has now launched on Twitter, which WhatsApp co-founder Brian Acton took part in. Facebook owns WhatsApp, but Acton left the company earlier in 2018 to start his own non-profit organization.

“The entire company is outraged we were deceived,” the statement continued. “We are committed to vigorously enforcing our policies to protect people’s information and will take whatever steps are required to see that this happens.”

As the scandal continues to grow, the Federal Trade Commission has also begun looking into whether Facebook potentially "violated an agreement with the agency." Zuckerberg has yet to comment on the issue.

Back in January, Facebook announced a series of privacy-focused updates, which were planned for a rollout ahead of a May 25 deadline for compliance with the General Data Protection Regulation in the EU. At the time, Facebook also revealed a new overhaul for the news feed that would favor friends and family posts over publishers. Zuckerberg said that this update would lessen the time its users spend on Facebook, but cause the time to "be more valuable."

ericgtr12
Facebook's sole purpose is to propagate information in a very detailed way, the fact that it's so easily attainable should be no surprise to anyone. In its own way it's a streamlined Trojan Horse.
Score: 11 Votes (Like | Disagree)

For me it was years ago. I'm sure that person from high school that never liked me 20 years ago and now wants to be my "friend" will be disappointed.
Score: 9 Votes (Like | Disagree)

brian3uk
Sorry macrumors but this feature has nothing to do with their data collection and use troubles. They're still gonna harvest all your chat data to sell you socks and ac filters.
Score: 8 Votes (Like | Disagree)

EdT
To everyone saying Facebook needs to go away: That won’t even begin to solve the problem as long as you don’t own your own information. Whatever app replaces Facebook will have the same problems with privacy and abuse. Twitter, Snapchat and Instagram have all had similar privacy and targeted manipulation problems, just not on the same scale. That we know about.

Since all of these companies (and more) claim that they own this information (about you) and have rights to manipulate and sell it as they see fit then whatever becomes popular after Facebook can and will be targeted the same way for the same reason.

And just try to get a bill passed about a person owning their digital data. Every online company you have ever heard of will campaign against it. And they have a lot more money and direct lobbying power.
Score: 4 Votes (Like | Disagree)

stylinexpat
If when you go out to buy a smartphone you see that it comes with Facebook preinstalled on it with no uninstall option then do not buy it. Do not buy the BS crap that it can be disabled. If it comes bundled in then do not buy it. Once everyone boycotts these smartphones with Facebook bundled in they will get the picture. Luckily Apple does not bundle them in on iPhones, China bans them and Blackberry does not bundle them in either. Sony Ericsson,LG and Samsung to name a few do though which is very bad. No uninstall option on them either so stay away from those smartphones
Score: 4 Votes (Like | Disagree)
Read All Comments