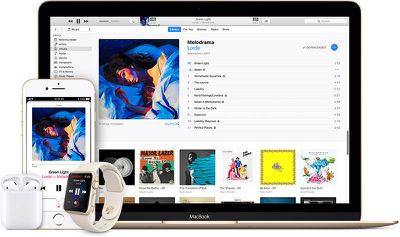 The numbers suggest Apple Music is growing at a clip of roughly 400,000 subscribers per week, or 1.6 million per month. Accordingly, it would appear to be Apple Music's fastest growth rate since it launched in June 2015, at least based on the figures that Apple has publicly shared over the past three years.

Spotify maintains a sizeable lead over Apple Music. The streaming music service revealed that it had 71 million paying subscribers as of the end of 2017, so it should be around twice as large as Apple Music by now. Spotify also has a free, ad-supported tier, giving it over 159 million listeners overall around the world.

Apple Music appears to be gaining ground on Spotify, however, and could reportedly eclipse its biggest rival in terms of U.S. subscribers later this year. The chart below from Apple analyst Horace Dediu is based on global subscribers.

Spotify launched in 2008, and expanded to the United States in 2011, while Apple Music debuted in over 100 countries at once in 2015. Both platforms offer individual subscriptions for $9.99 per month, student plans for $4.99 per month, and family plans sharable with up to six people for $14.99 per month.

Apple Music has the benefit of being preinstalled on hundreds of millions of iPhones and iPads. It's also available on Mac, PC, Android, Apple Watch, Apple TV, vehicles equipped with CarPlay, Sonos, and HomePod.

At SXSW, Cue estimated there are around two billion people that have access to and a means to pay for streaming music, suggesting the market is ripe for growth. Apple Music and Spotify have around 110 million subscribers combined, so there is clearly an opportunity for both services to continue growing.

The harder task for Spotify will be turning a profit, which it has yet to do. Apple Music executive and record industry mogul Jimmy Iovine recently said streaming music services are "not making any money" due to a lack of margins, suggesting that a standard $9.99 per month subscription is not profitable.

Apple Music's profitability is likely less of a concern for Apple, as it sells a wide range of other products and services. Apple's broad services category brought in a record $8.5 billion revenue last quarter, up 18 percent year over year.

mtneer
Is this the HomePod effect?
Score: 12 Votes (Like | Disagree)

OldSchoolMacGuy
Spotify is in for a bad time.
Score: 9 Votes (Like | Disagree)

Came here with the same thought. Definitely partially due to people buying HomePods and starting their free trial.

38 million PAYING members. Cue also said there are currently over 8 million ppl who are in the 3 month trial right now.
Score: 5 Votes (Like | Disagree)

WWPD
Apple Music has gotten much better at finding new music I like, just remember to love songs that you enjoy. The New Music mix actually plays mostly songs I might be interested in and I've discovered many new artists.
Score: 5 Votes (Like | Disagree)

jadot
EE are 'giving away' 6 months of Apple Music Subscription with a lot of their cellular plans at the moment in the UK.
Apple Music is a good service. I used it for a while there, but changed over to Amazon Music a few months ago so I could get myself out of that walled garden. It was just as well (for me) - I can't justify spending that much on an iPhone X when there are better phones on the market for less money. Now I've switched most of my iCloud services too, and can enjoy the best of all worlds; i.e. Mac OS on my desktop, iOS on my iPads, and Android on my Google Pixel, with google's ever expanding services used across the board, and Alexa in the kitchen. For me it's just a cheaper and more flexible way to get the best services at the time, without having to be locked into and waiting for iCloud, and it works really well. It's liberating not being tied into hardware like that. I don't have t get excited about the HomePod because I can build a better home assistant and speaker setup without the cost, for example.

The point is that I get to choose. Life's too short to think that Apple are the only game in town.
Score: 4 Votes (Like | Disagree)
Read All Comments