Early evaluations of Samsung's new Galaxy S9 and S9+ have ranked the S9 display and the S9+ camera above the iPhone X, but when it comes to performance, the iPhone X is still the clear winner.

In benchmark testing of the Samsung Galaxy S9 equipped with an Exynos 9810 chip, the iPhone X, and the iPhone 7 conducted by AnandTech, the iPhone X's A11 chip won in every comparison test, and in most cases, the Galaxy S9 also lost out to the A10 included in the iPhone 7. 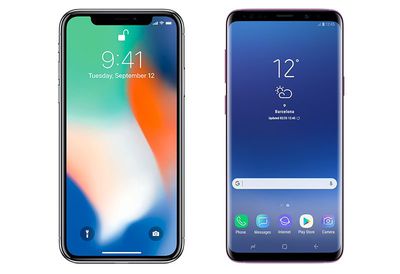 Simliar results were seen in a Speedometer 2.0 test, with the iPhone X (A11), iPhone 8 (A11), and iPhone 7 (A10) winning out over both of the processors used in Samsung's new devices.

AnandTech was testing a demo version of the Exynos-based Galaxy S9 and came to the conclusion that there was something wrong with the device given its poor scores on the latter two tests compared to the Snapdragon 845, but even had the Exynos 9810 shown performance on par with the Qualcomm chip, Apple's iPhones still offer better performance.

When it came to graphics performance, the iPhone X also came out on top, beating out both Samsung chip variants.

Full benchmarks on the new Samsung devices and AnandTech's conclusions about the Exynos 8910 chip can be read over on the AnandTech site, but it's clear that Samsung is still unable to match the performance Apple can eke out of its chips by controlling both the software and the chip design.

It's also worth noting that there's one other area where Samsung can't compete with Apple as of yet - facial recognition. As CNET points out, the Galaxy S9 and the Galaxy S9+ continue to use a 2D facial and iris recognition system that can't compare to the security of Apple's 3D face scanning technology.

The Galaxy S9 and S9+ use a 2D facial recognition system
The Galaxy S8, which used the same 2D feature, was able to be fooled by photos, and while the Galaxy S9 features iris technology that's "been enhanced" to recognize "unique iris patterns from greater distances" and to better withstand spoofing attempts, it's the same general system that was used in the previous-generation devices.

Because Samsung's facial recognition feature isn't as secure as Face ID, the South Korean company continues to pair it with fingerprint recognition, a biometric authentication method Apple is abandoning in favor of Face ID.

Apple's Face ID is a 3D system that uses a series of dots to map out a person's face. It can't be fooled by photographs.
KGI Securities analyst Ming-Chi Kuo has said that Android smartphone makers are two and a half years behind Apple when it comes to facial recognition techniques, so it could be awhile before Samsung has a similar system that can replace fingerprint scanning.
Tag: Samsung
Related Forum: iPhone
[ 455 comments ]

Apple_Robert
The iPhone X has been fast for me. I enjoy using the new features. And even though I am a tech geek, I am not hung up on benchmark tests. I also have no need to try and justify my purchase to some Android user, nor do I think the Android user has anything he or she needs to defend. Use what makes you happy regardless of what benchmarks say.
Score: 68 Votes (Like | Disagree)

dumastudetto
Apple is so far ahead of the competition it's almost embarrassing.
Score: 44 Votes (Like | Disagree)

Beats in benchmarks, loses in real world performance thanks to iOS 11 buggy mess.

Guess you missed those "real world" tests (like encoding 4K video) where the Note 8 gets slaughtered by the iPhone X. Even the iPhone 7 was faster.
Score: 39 Votes (Like | Disagree)

Nobody buys a $1K phone to run useless synthetic benchmarks that claim it's faster than PC CPUs. They will buy it if it can substitute for a PC replacement with DeX.

DEX is complete garbage because Android Apps are garbage (there aren't any good Android tablet Apps so why would you even want to run them with a keyboard/mouse and large monitor).
Score: 24 Votes (Like | Disagree)
Read All Comments