KGI Shares Latest on 6.1-Inch iPhone, Next iPhone X and iPhone X Plus to Have 4GB of RAM and Two-Cell Batteries 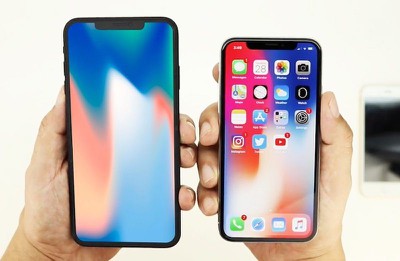 iPhone X Plus dummy model versus current iPhone X via Ben Geskin
MacRumors obtained a copy of each research note, and we've rounded up the key points. More details are available in our 2018 iPhones roundup.

• Taiwanese manufacturers Pegatron, Foxconn, and Wistron will be the key assemblers of the 6.1-inch iPhone, with 60 percent, 30 percent, and 10 percent allocation of EMS respectively
• Japan Display will supply around 70 percent of LCD panels for the 6.1-inch iPhone. Rumors suggest Apple will use Japan Display's six-inch Full Active LCDs that only require ultra-slim 0.5mm bezels on all four sides

• Nearly full screen design with no home button and notch for TrueDepth sensors
• 3D sensing for Face ID and Animoji
• Rectangular-shaped, one-cell battery with 2,850-2,950 mAh, up to 8.5 percent larger than current iPhone X. The increased capacity will be the result of a smaller logic board given manufacturing advancements
• Lower price point: starting at between $700 and $800 in the United States

The rumored 6.1-inch iPhone is shaping up to be a lower-priced iPhone X with some design compromises, which Kuo previously said will include an aluminum frame, a lack of 3D Touch, a single rather than dual lens rear camera, and 3GB of RAM, which will be less memory than other new 2018 iPhones have.

According to Kuo, the second-generation iPhone X and a larger 6.5-inch version we're calling iPhone X Plus will each have an increased 4GB of RAM. Unsurprisingly, given its larger physical size, the iPhone X Plus is also expected to have up to a 25 percent larger battery capacity of 3,300-3,400 mAh vs. iPhone X.

By the sounds of it, the new iPhone X and iPhone X Plus, beyond the latter's larger screen size, won't be significant upgrades. Kuo doesn't expect improvements to be made to the TrueDepth camera system until 2019. Nevertheless, he expects the devices to sell well, especially the lower-priced 6.1-inch iPhone.

macfacts
Looks like 2gb ram iOS devices are soon to be outdated. Better not update iOS on those devices anymore.
Score: 38 Votes (Like | Disagree)

asdavis10
Lack of 3D Touch? These "analysts" are taking a shot in the dark. There is no way Apple does this.
Score: 28 Votes (Like | Disagree)

Bawstun
Again with the lame notch design? How many more iterations of the iPhone will it take before I will be able to purchase new device? Still not buying one as long as they’re “settling” on aesthetics with that ridiculous notch.
[doublepost=1517166253][/doublepost]

Lack of 3D Touch? These "analysts" are taking a shot in the dark. There is no way Apple does this.

Apple is discontinuing 3D Touch. As it was an under-used, under-developed, and mostly unwanted feature, like most things they release these days.
Score: 24 Votes (Like | Disagree)

macsrcool1234
The amount of fragmentation is just getting absurd. They need to trim the SKU's, the feature vs price difference just isn't there.
Score: 19 Votes (Like | Disagree)

Ds6778
Lol they’re literally creating a “knockoff” of their own phone. Oh you want the X but can’t afford it? Here’s a gimped crappy version of it! Get the look without the price! Their product line grow more confusing by the minute. SAD.
Score: 19 Votes (Like | Disagree)
Read All Comments

Monday July 26, 2021 4:53 pm PDT by Juli Clover
During a Tesla earnings call that took place today, Tesla CEO Elon Musk spent time sniping at Apple, reports CNBC. Musk criticized Apple's "walled garden" and made comments on the company's cobalt use. In a discussion about plans to allow Tesla competitors to use the Tesla electric vehicle charger network, Musk said that Tesla does not want to create a walled garden to "bludgeon" Tesla...
Read Full Article • 333 comments