Next year's version of the iPhone X could feature up to 10 percent more battery power if Apple and LG Chem are able to deploy a one-cell design for the device's L-shaped battery, as opposed to the two-cell battery used in the iPhone X, according to a report from KGI Securities analyst Ming-Chi Kuo that was obtained by MacRumors.

Kuo says the more space efficient one-cell design would allow Apple to boost battery capacity from 2716 mAh in the iPhone X to somewhere between 2900 and 3000 mAh for next year's 5.8-inch iPhone.

As he previously claimed, Kuo believes Apple will release three new iPhones with TrueDepth cameras next year: a larger 6.5-inch OLED model that can be thought of as an "iPhone X Plus", a 5.8-inch OLED successor to the iPhone X, and a 6.1-inch LCD model. Today's report says that Apple is likely to use a two-cell battery design in the 6.5-inch model, but the larger size of the device will still allow it to have a capacity in the range of 3300 to 3400 mAh. 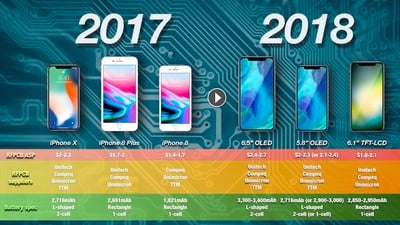 Two new 2H18 iPhone models could adopt L-shaped battery (6.5” & 5.8” OLED models), with capacity upgraded for all models. In order to extend battery life, we believe it is necessary to expand battery capacity because all three new 2H18 models will be equipped with TrueDepth Camera, which consumes more power. We think Apple (US) is developing a 1-cell L-shaped battery in collaboration with LGC (KR). If the new battery enters mass production on time, the 5.8” OLED iPhone model will come with a battery with larger capacity (2,900-3,000mAh with higher RFPCB ASP $2.1-2.4). For the 6.1” LCD model, we expect Apple to keep the rectangular battery design to keep a better cost structure, and we expect capacity could be larger than those of the iPhone 8 series.

Some observers were surprised to see a two-cell battery inside the iPhone X when it was opened up by iFixit just after its launch, but there are technical challenges involved in producing non-rectangular battery cells, challenges Apple was unable to overcome in time for the iPhone X.

iPhone X battery from iFixit's teardown
With device space at a premium and a number of power-hungry components like the TrueDepth camera, however, it's unsurprising that Apple and its supply chain partners are pushing forward to develop a one-cell design to provide more battery capacity within the same volume.
Tags: KGI Securities, Ming-Chi Kuo
Related Forum: iPhone
[ 91 comments ]

macs4nw
Translation: Next year's iPhones will be thinner yet, with same battery life.
Score: 31 Votes (Like | Disagree)

I bet they come with a faster processor too.
Score: 19 Votes (Like | Disagree)

Böhme417
Maybe my reading comprehension is a bit off tonight, but don't those first two paragraphs contradict each other?

"...10 percent more battery power if Apple and LG Chem are able to deploy a one-cell design for the device's L-shaped battery, as opposed to the two-cell battery used in the iPhone X..."

"...the more space efficient two-cell design would allow Apple to boost battery capacity from 2716 mAh in the iPhone X to somewhere between 2900 and 3000 mAh for next year's 5.8-inch iPhone"
Score: 8 Votes (Like | Disagree)

lwells1441
There is SO much wrong with this article.

1.) Not 10% more powerful. It would be 10% more energy.
2.) Apple can already make non rectangular batteries. They advertised it well with the 'terraced battery'.
3.) Apple does not need LG to do squat. They get most of their cells from revolving smaller Chinese suppliers.

The issue isn't a technological one. It's cost. Non-rectangular cells mean that the electrodes cannot be 'wound'. This requires stacking electrodes which produces a lot more waste and requires a lot more automation.
Score: 8 Votes (Like | Disagree)

Monday June 21, 2021 7:17 am PDT by Hartley Charlton
Users appear to be underwhelmed by Apple's upcoming iOS 15 and iPadOS 15 updates, according to the findings of a new survey by SellCell. The survey asked 3,000 iPhone and iPad users, evenly split between men and women, aged 18 or over in the United States, what they thought of iOS 15, iPadOS 15, and the naming of the upcoming iPhone 13 lineup. Over 50 percent of all of the survey's...
Read Full Article • 326 comments

Monday June 21, 2021 7:07 am PDT by Joe Rossignol
Following widespread reports that the iPhone 12 mini has experienced poor sales performance, at least relative to other iPhone 12 models, Taiwanese research firm TrendForce today claimed that production of the device has already ended. According to TrendForce, the iPhone 12 mini "reached End-of-Life ahead of time" during the second quarter of 2021, suggesting that Apple will focus on selling ...
Read Full Article • 157 comments