One year after launching a "Ring in the New Year" challenge for Apple Watch owners, Apple today is rolling out the challenge again for 2018. The challenge's rules appear slightly similar to last year, requiring you to close all three Activity rings for seven days in a row in January. During the previous challenge, you had to accomplish the same goal coupled with the specific requirement of the Activity streak lasting from a Monday to a Sunday. 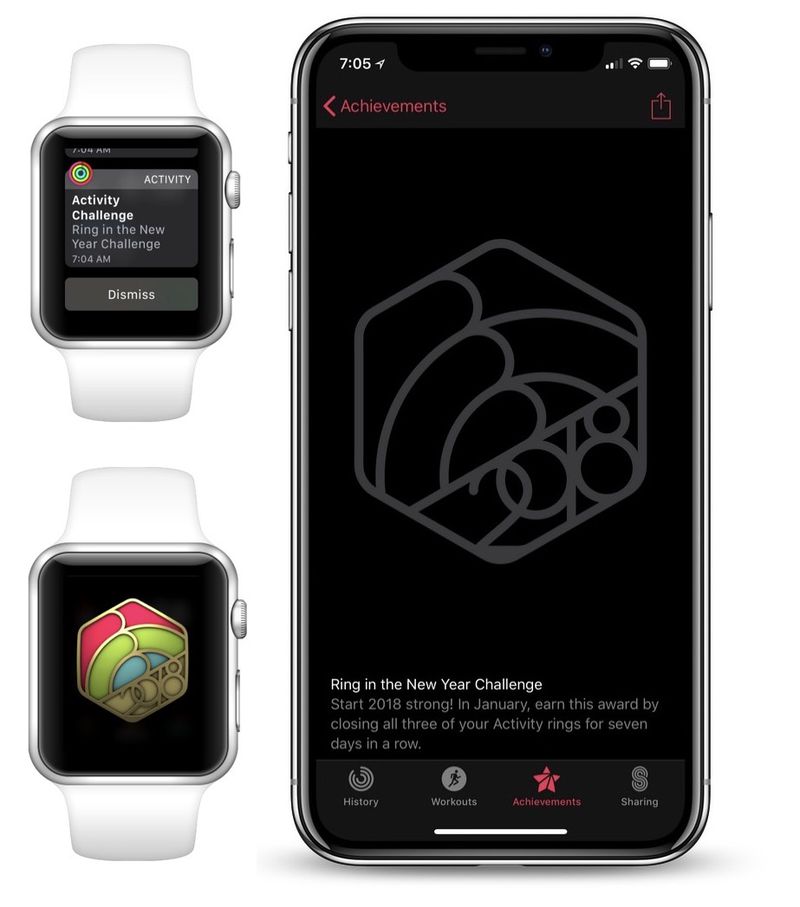 Once you complete the task you'll get a special Apple Watch achievement, which has been designed liked the 2017 award. Apple has been consistently launching Apple Watch challenges for its users, most recently including Thanksgiving, Veterans Day, Mother's Day, Earth Day, and even a challenge designed to celebrate America's national parks.

nicho
I got mine already! Who doesn't love a bug or two? That's just pathetic. I'd never stoop to jumping jacks at 11 pm. Now, stairs at the in-laws is an entirely different story...
Rating: 3 Votes

Apple Watch owners in US?

Yep, I should have added a line about others already having got it yesterday:)
Rating: 3 Votes

AngieG24
I agree the challenges are great. I had a 740 day streak going with all three rings - but lost it when my iPhone 7 bricked - and even though my phone had backed up to the cloud that night (after all rings closed) - because the watch didn’t unpair when the phone bricked, I lost a half a day of data. Streak over. Knowing it can all go down the drain makes me way less concerned about the rings - which is too bad. I wish all activity went straight to the Cloud in real time, but that’s not how it works.
Rating: 3 Votes

For future reference, just fire up the "Other" activity. Clocks in the Move and Activity, even when you're just sitting there enjoying a movie.

Yay, cheating. What's the point at that point? Are you really fooling anyone?
Rating: 2 Votes

I got mine already! Who doesn't love a bug or two?


Same here, got it earlier today

Kermit262
I've closed all three rings since getting my watch on Oct. 2. But yesterday I almost didn't because I had so many things with the family going on and I was almost resentful that I had the streak hanging over my head (I only managed to close it while doing jumping jacks while watching a movie with my daughter). This new incentive came at a perfect time. I really like these challenges.
Rating: 2 Votes

That also improves your exercise, so I guess you fooled yourself into burning more calories :P
Rating: 2 Votes

midkay
What a year for buggy software. It's somewhat understandable with there being SO MANY NEW THINGS introduced this year, requiring a preposterous amount of engineering effort, but I really hope 2018 brings a stability focus.
Rating: 2 Votes

Zadigre
I work in front of a computer all day. I'm more active in the summer... I usually set my red ring to 650 calories.
But in the winter, I go out less often... thus I do not reach this 650 goal everyday. I'm tempted to just lower it down to a level that I can usually reach when I do a quick 20 minutes exercises in the morning (which should be around 550).

What is it set for you?