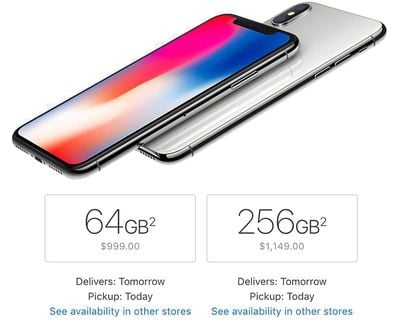 Apple quotes delivery by tomorrow for all iPhone X models except the silver SIM-free version with 64GB of storage, which is estimated for delivery within 2-4 days. This means every iPhone X is still a last-minute gift option.

Apple is also offering next-day delivery of all iPhone X models on its online store in the United Kingdom, and in some other countries, shipping estimates are short enough that delivery before Christmas may still be possible.

With next-day delivery now available, it would appear that Apple has achieved supply-demand balance of the iPhone X, at least for now.

Apple analyst Ming-Chi Kuo said improved iPhone X shipping estimates are the result of better-than-expected production, rather than weak demand. He originally predicted the iPhone X would likely remain in short supply until 2018.

Just hours after iPhone X pre-orders began in late October, Apple issued a statement to MacRumors indicating that customer demand was "off the charts."

We'll have to wait until Apple releases its next quarterly earnings results to analyze just how well the iPhone X has sold, but Apple's revenue guidance of $84-$87 billion suggests the smartphone's sales will be very strong.

iPhone X shipping estimates were initially pushed back to 5-6 weeks, but gradually shortened to just a few days by last week.

Apple always offers free next-day delivery of in-stock iPhone models, and it has extended the deal to all in-stock items ordered from its online store by 3 p.m. local time on Friday, December 22 in the United States.

blairh
I regret my X purchase. Simply because I don't think it's worth the price.
Score: 18 Votes (Like | Disagree)

htvicar
The X hype is over hahaha
Score: 17 Votes (Like | Disagree)

littyboy
After using it for a good month, I can strongly say it's not worth it. The faceID feels really first generation. It fails multiple times during these top 4 situations.

1. laying in bed with a pillow
2. barely waking up and your eyes are semi-closed
3. trying to unlocking from the side, basically right next to you on the table
4. if the phone too close to face,

TouchID is >>>> than faceID. But this is the trade off for greater screen to body ratio.
Score: 15 Votes (Like | Disagree)

keysofanxiety
Got my X yesterday. Without doubt the best iPhone I've ever used. It's so intuitive - I simply can't imagine going back to the home button or Touch ID. The technology melts into the background and I've mostly forgotten about Face ID as it does it automatically and there's no deliberate "action" to unlock it. I now can't see myself using an iPhone any other way.

I haven't had such a smooth user experience since I bought my very first iPhone (iPhone 4). That was so ahead of everything else on the market at the time and I feel much the same here. Wonderful job.
Score: 13 Votes (Like | Disagree)

After using it for a good month, I can strongly say it's not worth it. The faceID feels really first generation. It fails multiple times during these top 4 situations.

1. laying in bed with a pillow
2. barely waking up and your eyes are semi-closed
3. trying to unlocking from the side, basically right next to you on the table
4. if the phone too close to face,

TouchID is >>>> than faceID. But this is the trade off for greater screen to body ratio.

1. With gloves
2. With wet hands
3. With greasy hands
4. With dirty hands
5. With sweaty hands

Again, FaceID was NOT just replacement for TouchID. When will people understand this? The tech behind the notch will drive many more feature from apps we haven't seen or thought about yet, primarily for AR.
Score: 8 Votes (Like | Disagree)

BMcCoy
Just in time for Christmas ordering.. what a staggering coincidence... ;)
Score: 7 Votes (Like | Disagree)
Read All Comments

Sunday January 23, 2022 2:59 am PST by Tim Hardwick
Apple has always emphasized the depth of thought that goes into the design of its products. In the foreword to Designed by Apple in California, a photo book released by the company in 2016, Jony Ive explains how Apple strives "to define objects that appear effortless" and "so simple, coherent and inevitable that there could be no rational alternative." But every once in a while even Apple...
Read Full Article • 413 comments

Monday January 24, 2022 9:20 am PST by Juli Clover
AT&T today announced the launch of upgraded AT&T Fiber plans, which support speeds of up to 5 Gigabits for some customers. There are two separate plans, one "2 GIG" plan and one "5 GIG" plan, available to new and existing AT&T Fiber subscribers. According to AT&T, the new plans are available to nearly 5.2 million customers across 70 metro areas including Los Angeles, Atlanta, Chicago, San...
Read Full Article • 198 comments

Monday January 24, 2022 7:12 am PST by Sami Fathi
Three months after their launch, the 14-inch and 16-inch MacBook Pros continue to experience high demand and seemingly short supply, with shipping dates for both models stretching into multiple weeks in several of Apple's key markets. In the United States, the baseline 14-inch MacBook Pro with the M1 Pro chip is estimated to ship in three to four weeks, promising an arrival by at least...
Read Full Article • 168 comments