It's been six months since Apple CEO Tim Cook announced that Amazon Prime Video would be coming to Apple TV later this year, and now that app is officially beginning to roll out to tvOS devices in the U.S., Canada, the U.K., and several other regions across Europe. 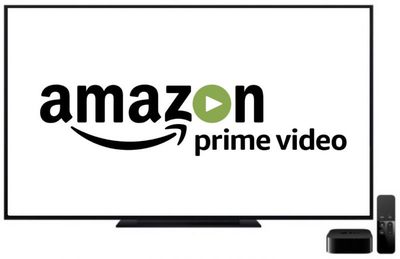 Similar to other versions of Amazon Prime Video, the Apple TV app allows Prime subscribers to sign into their accounts and watch Amazon Prime exclusive TV series, as well as browse a collection of movies. Users can add shows and movies to a watchlist, sync their watchlist across devices, and use Apple TV's Siri Remote to search for Amazon content from inside the app.

The updated Amazon Prime Video iOS app now supports Universal Search, allowing users to look up Prime videos using the native search function on their devices. Version 5.0 of the iOS app also supports iPhone X displays. While the tvOS app is a separate component of the installation, Amazon Prime Video is available on pre-app store third-generation Apple TVs as well as fourth-gen and 4K Apple TVs, according to the release notes. (A simple reboot on a third-gen Apple TV should cause Prime Video to appear on the main screen.)

Prior to its official launch, there were numerous release date rumors surrounding the Amazon Prime Video tvOS app. The first pointed to its launch on the day of the iPhone X keynote event, and then a separate report from Recode countered that rumor with sources that claimed the app would not be ready at that time. Later in September, the next rumor predicted its launch alongside Thursday Night Football, and when that date came and went the most recent rumor -- sourced from a Redditor claiming to work for Amazon -- predicted an October 26 debut.

Yesterday, a redditor opened up the App Store and saw an Amazon Prime Video story as the top feature in the "Today" section, after he had manually turned his device's clock forward by a day. He linked the section on reddit, which other users were able to see temporarily before the content was pulled by Apple. The "Today" App Store description in question specifically referenced Amazon Prime Video for Apple TV, which was finally launched today.

Amazon Prime Video was one of the last remaining streaming service holdouts to release a tvOS app, so users will now be able to rely on the 4th and 5th generation Apple TV devices a little more without having to use a PlayStation 4, Fire TV, or Roku to jump to Amazon's video catalog. In terms of other Apple products with Amazon Prime Video apps, users can also watch Prime shows on iPhone and iPad with the company's iOS app [Direct Link], which also supports downloading select videos to view offline.

OldSchoolMacGuy
People complained up a storm that this app didn't come along sooner. Now within 24 hours of having it they'll realize there's still nothing good to watch.
Score: 11 Votes (Like | Disagree)

Not interested unless it supports the «TV» app in full.

Well, I would agree with you, except I live outside of US so TV app does not work anyway...
Score: 9 Votes (Like | Disagree)

timmyh
Please let us know in the comments if you're seeing the app outside of the U.S. Thanks!
Score: 8 Votes (Like | Disagree)

1) This isn't as important but the lack of audible cues I'm used to hearing from a tvOS app, parallax and the top navigation bar requiring a confirmation press are all a bit jarring

2) No surround sound. WHY!? There's simply no excuse for this.
Score: 7 Votes (Like | Disagree)

I never really found Prime video to be all that good, but I'll check it out later today. If it means more 4K content, I like it. What are some good shows on Prime?

Bosch, man in the high castle, Goliath and of course Grand Tour
Score: 7 Votes (Like | Disagree)
Read All Comments

Friday May 27, 2022 2:15 pm PDT by Juli Clover
There's just over a week to go until the 2022 Worldwide Developers Conference, which is one of the biggest Apple events of the year. We've heard surprisingly little about iOS 16 this year, so we're in for some major surprises when June 6 rolls around. As we wait for the keynote event, we thought we'd share some iOS 16 wishlist items from MacRumors readers, because who knows? We just might...
Read Full Article • 250 comments