Apple has announced that Apple Pay Cash officially launches today for all iOS 11.2 users with an eligible iPhone or iPad model in the United States. 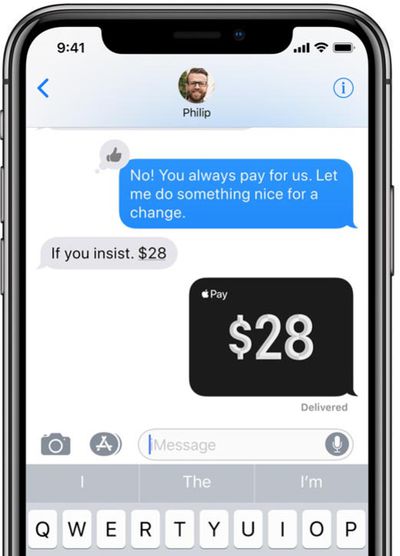 Apple's peer-to-peer payment service actually began rolling out in iOS 11.2 on Monday, but some users received an error message stating the service was unavailable. The activation issues began to resolve for many users later in the day, although there are still a few lasting reports of activation issues.

Apple Pay Cash's official launch today comes three days after iOS 11.2 was released early in order to address a serious date bug that was affecting some users on December 2. While the update introduced Apple Pay Cash, as mentioned in the release notes, the feature had not yet been activated by Apple.

After setting up Apple Pay Cash, open the Messages app, tap on the App Store icon, tap on Apple Pay, set the dollar amount, tap pay, select a payment card, and securely authenticate with Touch ID or Face ID. The payment card can be any debit or credit card set up in the Wallet app, or the Apple Pay Cash card.

The recipient taps on the message to receive the funds, which are instantly added to his or her Apple Pay Cash card in the Wallet app. The card's funds can be used to make purchases using Apple Pay in stores, in apps, and on supported websites, or withdrawn to a bank account within one to three business days.

When new users receive money for the first time, the funds are added to their new Apple Pay Cash card once they accept Apple's terms.

You can also send money with Siri, as explained in our How to Use Apple Pay Cash guide, which includes step-by-step setup instructions and other helpful info. Apple Pay Cash is currently available in the United States only. Apple hasn't indicated when the service could expand to additional countries.

Apple Pay Cash is available on iPhone 6 and later, iPhone SE, all iPad Pro models, the fifth-generation iPad, iPad Air 2, and iPad mini 3 models running iOS 11.2. Apple recommends that customers who have updated to iOS 11.2 before today restart their devices if Apple Pay Cash is not showing up.

iPhone 5s is arbitrarily excluded simply because of its age? Typical Apple...

Or maybe it’s because the 5S doesn’t work with Apple Pay at all, it never has and never well.
Score: 18 Votes (Like | Disagree)

Requires two-factor authentication be turned on.

It's been hard enough to avoid it with every OS upgrade. Looks like they're finally going to start withholding features to force us all along.

If you aren't using two-factor then you are a part of the problem, not the solution. That you have to be forced to use something you should have been anxious to use from day one says a lot about your judgement. I'm happy Apple is forcing people to not be silly and I hope other companies follow their example.
Score: 13 Votes (Like | Disagree)

iPhone 5s is arbitrarily excluded simply because of its age? Typical Apple...

It doesn’t have Apple Pay, so why would it get Apple Pay cash?
Score: 12 Votes (Like | Disagree)

WannaGoMac
Thank goodness this came out versus iMessage in the cloud. This is just far more useful as there arent really any mobile payment platforms available for iPhone users right now /s
Score: 6 Votes (Like | Disagree)

“Apple Pay Cash allows for quick person-to-person money transfers, much like competing services Square Cash and Venmo.”
Except it’s only for iOS users. Which is really lame! It’s almost 2018, and Apple is rolling out features that are so late to the tech game, and very limited.

Lame in your opinion. Useful for me. For example, going out to lunch with coworkers and splitting the bill. 3/4 of the department have iPhones, as well as most of the others who would be joining us. We already use iMessage to communicate and all use Apple Pay.
Score: 5 Votes (Like | Disagree)

Stupid P2P Apple Pay (to me). I personally do not want that cash transfer capability configured on my phone.

Yet, the feature turned-on automatically, requiring a manual operation to opt-out.
Is this by design?

Default should be OFF.

Why should it default to off? Because you don't want to use it, it should be harder for others to access?
Score: 4 Votes (Like | Disagree)
Read All Comments