Apple today released watchOS 4.1, the first major update to the watchOS 4 operating system that runs on the Apple Watch. watchOS 4.1 comes more than a month after Apple released the new watchOS 4 to the public and it follows several weeks of developer beta testing.

watchOS 4.1 can be downloaded through the dedicated Apple Watch app on the iPhone by going to General -> Software Update. To install the new software, the Apple Watch needs to have at least 50 percent battery, it needs to be placed on a charger, and it needs to be in range of the iPhone. 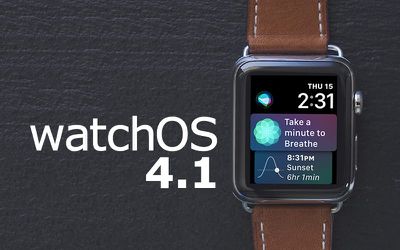 The watchOS 4.1 update introduces support for streaming Apple Music content directly to LTE-equipped Apple Watch Series 3 models, allowing Apple Watch owners to listen to Apple Music even when an iPhone isn't nearby. A new Radio app that offers access to Beats 1 and other Apple Music radio stations is also included.

Subscribe to the MacRumors YouTube channel for more videos.
The Music app on the Apple Watch looks largely unchanged, offering up access to the Music Library, recently played songs, playlists, and Apple Music mixes, but now all Apple Music content can be streamed over an LTE connection and doesn't need to be downloaded to the device.

watchOS 4.1 also introduces a new Wi-Fi toggle for turning off Wi-Fi to force the Apple Watch to use an LTE connection and it displays the Wi-Fi SSID when connected to Wi-Fi os users can see which network the watch is using. The update also brings GymKit, allowing the Apple Watch to pair with supported gym equipment for information sharing purposes.

Along with these features, today's update introduces a range of new Unicode 10 emoji characters that include vomiting face, head exploding, mermaid, zombie, hedgehog, fairy, broccoli, and more. The new emoji are also available on iOS 11.1 and macOS High Sierra 10.13.1.

There are also several bug fixes and security improvements, including a fix for a serious vulnerability in the WPA2 Wi-Fi standard that protects many modern Wi-Fi networks. Full release notes for the update were released early and are below:

For more information on watchOS, including the new watchOS 4.1 update, make sure to check out our dedicated watchOS 4 roundup.

This watch is starting to become a more interesting device to me now. I think in a couple years, when battery life has improved to a point that LTE doesn't drain it completely, and it can have a few days of life with usage, then I will pick one up. For now I am going to wait.

Thank you for your input.
Score: 10 Votes (Like | Disagree)

iosiseasy
Is anyone ever mad when they don't receive a stand notification?
Score: 3 Votes (Like | Disagree)

Nothing to be excited about if you're not an Apple music subscriber.

Not true. I don't have an Apple Music subscription but I am excited because now I can stream my entire library of music via iCloud music match.
Score: 3 Votes (Like | Disagree)

Amazing Iceman
Beats 1 is free, just that I couldn't care less for it.
I'm more interested in listening to the other stations, but those require an Apple Music subscription... Lame!
What happened to the free internet radio included in iTunes in the past?
Score: 3 Votes (Like | Disagree)

You could be dead in two years. Even if yo aren’t you are missing out in a bunch of utility if you wait. Three of us bought S0 when first available and have been increasingly happy with each software upgrade. We now bought S3 LTE replacements but will keep old watches for nighttime monitoring.

Yeah if someone is going to be DEAD in two years, the last priority in life would be to get a smart watch I think lol....
Score: 2 Votes (Like | Disagree)
Read All Comments