Apple May Be Testing Autonomous Vehicles at Arizona Site

Apple may be leasing a former Fiat-Chrysler vehicle testing site in Arizona for autonomous vehicle research purposes, according to an unnamed source that spoke to Jalopnik.

Apple has reportedly been recruiting automative test engineers and technicians from vehicle proving grounds around Arizona to work at the site, located in Surprise, Arizona, but neither Apple nor Fiat-Chrysler would confirm Apple's presence at the location.

Fiat-Chrysler in the early 2000s used the site to test the impact of hot temperatures on cars and their components. The location is said to contain multiple road surfaces, a high speed oval, steep grades, and areas dedicated to wet weather testing. 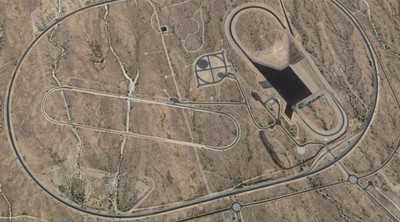 A Google Earth image of the test site in Surprise, Arizona, via Jalopnik
It was sold to a developer for $312 million in 2005 as a housing location, but the plans fell through and it has been unused for the past several months. Jalopnik says that records suggest recent activity has been spotted on the site, which has now been leased to a company called Route 14 Investment Partners LLC.

There's no clear link between Apple and Route 14 Investment Partners LLC, but Apple has been known to use shell companies for leasing properties, trademarking, and other purposes.

It would also not be unusual or surprising for Apple to lease an autonomous vehicle testing site, as the company has made it clear that an autonomous system is something that's in the works.

While Apple was originally said to be working on developing a full autonomous electric vehicle, the company's focus shifted to an autonomous driving system in 2016 after the return of Bob Mansfield, who took over the project.

"We're focusing on autonomous systems. It's a core technology that we view as very important. We sort of see it as the mother of all AI projects. It's probably one of the most difficult AI projects actually to work on," he said.

Checkmate. Apple has won yet again.

They haven’t even won on Apple maps, they are years behind driverless tech
Score: 5 Votes (Like | Disagree)

if that can happen, i can ditch the need to own a car.
Score: 2 Votes (Like | Disagree)

they are years behind driverless tech

i wouldn't bet on that. they started a lot sooner than most news outlets have reported on.
Score: 2 Votes (Like | Disagree)

Checkmate. Apple has won yet again.

Care much for the internet likes ?? Looking at your signature
Score: 2 Votes (Like | Disagree)

if that can happen, i can ditch the need to own a car.

The joy of driving can never be crushed!

Sadly, Ferrari has already ruined it by putting full auto in all Ferraris and Maseratis. Lamborghini still offers semi-automatic, which makes a world of difference in terms of fun. And Formula 1 still uses semi-automatic since full auto is banned.
Score: 1 Votes (Like | Disagree)
Read All Comments

Friday July 10, 2020 11:12 am PDT by Juli Clover
Apple this month published a support document that warns customers against closing their Mac notebooks with a cover over the camera as it can lead to display damage. Image via Reddit Apple says that the clearance between the display and the keyboard is designed to very tight tolerances, which can be problematic. Covering the camera can also cause issues with automatic brightness and True Tone....
Read Full Article • 298 comments

Friday July 10, 2020 1:59 am PDT by Tim Hardwick
Later this year, Apple is expected to release four OLED iPhones in three display sizes, including 5.4, 6.7, and two 6.1-inch models. Rumors suggest the 6.7-inch iPhone and one 6.1-inch model will be higher-end devices, and now leaker @L0vetodream has corroborated previous rumors about the internal specs of Apple's upcoming lineup. Rumors suggest Apple will use 5-nanometer A14 chips in its...
Read Full Article • 65 comments

Friday July 10, 2020 7:24 am PDT by Eric Slivka
Apple and Foxconn have reached a key milestone in the development of Apple's long-rumored augmented reality headset, with the semitransparent lenses for the device moving from prototype to trial production, reports The Information. Apple is developing the lenses on a single production line at a Foxconn factory in Chengdu in southwestern China, where most of Apple’s iPad production is...
Read Full Article • 76 comments

Friday July 10, 2020 2:58 am PDT by Tim Hardwick
At last month's WWDC, Apple officially announced that its Mac computers will be transitioned from Intel x86 to homegrown Apple Silicon chips. Apple said it plans to deliver the first Apple Silicon Mac by the end of the year and complete the transition in about two years. According to Apple analyst Ming-Chi Kuo, a 13.3-inch MacBook Pro with a form factor similar to the current 13.3-inch...
Read Full Article • 173 comments