Thursday October 19, 2017 4:23 pm PDT by Juli Clover
One month after its official public release, iOS 11 has been installed on 54.49 percent of devices, according to data collected by analytics company Mixpanel.

iOS 11 was first released on September 19, and while adoption has been rather slow compared to iOS 10 adoption, it is steadily picking up. At the one week mark, iOS 11 was installed on 25 percent of devices, and at two weeks, installation climbed to 38.5 percent of devices. 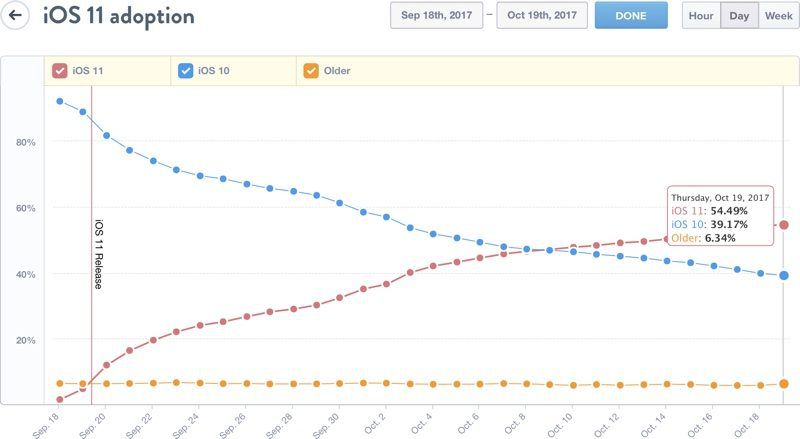 Apple has released three minor updates to iOS 11 so far to address bugs and issues discovered since the launch of the new operating system. The most recent update, iOS 11.0.3, fixed an issue with haptic feedback and unresponsive displays, while iOS 11.0.2 addressed an irritating problem that caused the iPhone 8 and 8 Plus earpiece to crackle on phone calls.

iOS 11 adoption is likely to increase significantly when iOS 11.1 is released, if past iOS launches are any indication. Major .1 releases often spur people to update, and iOS 11.1 introduces new emojis and may include Apple Pay Cash, Apple's peer-to-peer Apple Pay feature. In past years, new emoji have had a noticeable impact on upgrade rates.

The iOS 11.1 update also fixes some lingering bugs, including one that caused Reachability to work improperly, and it addresses a serious WPA2 Wi-Fi vulnerability. It's not yet clear when Apple plans to release iOS 11.1, but there have been three betas thus far.

jujufreeze
Thousands of Apple reddit users are complaining what a buggy mess ios 11 is, and they think MR is too negative.
Rating: 18 Votes

rowspaxe
Not on my devices!
Rating: 17 Votes

chriscrowlee
I only went to iOS 11 for the features Apple spent half their WWDC keynote on... you know, P2P Apple Pay Payments, iCloud Sync iMessages, and Single Sign On TV Provider functionality.

You can imagine how excited I am to have installed iOS 11. LOL 0 for 3. Guess Apple figures since they teased it in June then went crickets, they needed something to distract people at launch...


Guess that's all it takes to distract today's Apple customer.... or at least the customer Apple is trying to appeal to. I suppose this is what happens when you get a conference room full of 50-somethings and white board "what are kids into these days?" and design your feature set around that.
[doublepost=1508453544][/doublepost]

iOS 11 has been the best OS upgrade I've ever installed. I absolutely love it. No joke


More than you enjoy working for Apple? TVreporter
Forget the usage percentage; how about surveying how many have had problems or are satisfied with ios11
Rating: 12 Votes

Ds6778
I miss the good old days where Apple released extremely stable/well polished software. Now we get “good enough” versions and spend the rest of the year ironing out everything just in time to start all over again.
Rating: 11 Votes

ThiGeever
55% of the world's iOS devices screwed up by Apple.
Rating: 11 Votes

I have a 128GB 7. That would be crazy to manage space that way. Guess it works. Insane.


Or, Apple could be the user-friendly company they used to be, and now can only claim to be, and allow people to run the software of their choice on the devices they own.

Instead, they use underhanded methods like that deceptive "Later" button and subsequent dialog with the fine print "Remind me later" to fool people into updating. It's just plain atrocious UX and disrespectful no matter who designed it.