The iOS 11.0.2 update can be downloaded to all eligible devices over-the-air in the Settings app. To access the update, go to Settings --> General --> Software Update. 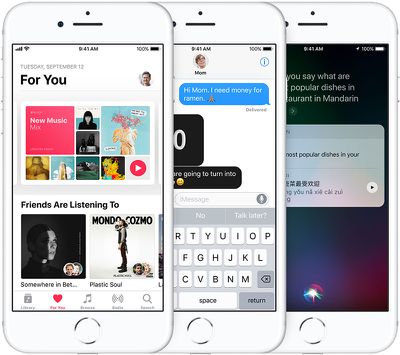 Today's update addresses bugs that have been discovered following the release of iOS 11. According to Apple's release notes, the update fixes an issue that caused some iPhone 8 and iPhone 8 users to hear a crackling or static noise coming from the earpiece during phone calls and FaceTime calls.

The bug, described by users as "very annoying," was first discovered shortly after the launch of iOS 11, and in late September, Apple said it was working on a fix that would be released in a future update. For affected users, the only way to avoid the static sound was to use headphones or the speakerphone function, as changing cellular settings and resetting the device did not help.

Following the update to iOS 11.0.2, iPhone 8 and 8 Plus owners that have been plagued by crackling should be able to resume phone calls as normal with no further interruption. Today's update also addresses an issue that could cause some photos to become hidden and it fixes an email bug.

iOS 11 is a major update to the iOS operating system, introducing a redesigned Lock screen experience, a new customizable Control Center, a more natural Siri voice, a redesigned App Store, new HEVC and HEIF codecs for better photo and video efficiency, and an entirely overhauled interface for the iPad. For more info on all the new features in iOS 11, check out our iOS 11 roundup.

OldSchoolMacGuy
Hope it solves every problem everyone has ever complained about.
Score: 76 Votes (Like | Disagree)

I really don’t get it. The alternative is an OS with bugs that don’t get patched quickly and if they get patched, they get it done months later after the OS maker releases an update, the manufacturer of the device codes it to their specific devices and then your respective carrier signs off on it. If all that happens, then the bugs get squashed.
Score: 38 Votes (Like | Disagree)

calzon65
Looking forward to IOS 11.3.3 in about 8 months when bugs are finally fixed :rolleyes:
Score: 32 Votes (Like | Disagree)

polterbyte
Is it slower in draining battery charge? That's the main issue I want improved.
Score: 28 Votes (Like | Disagree)

jdillings
So Apple now has their own version of Patch Tuesday?
Score: 22 Votes (Like | Disagree)

DocMultimedia
Wonder if it will fix the brutal battery drain. I watched it trickle down from 35% to 30% in about three minutes while using Safari to read news (no video or anything).
Score: 21 Votes (Like | Disagree)
Read All Comments