Wells Fargo today announced that NFC functionality is now available at more than 5,000 of its ATMs across the United States. 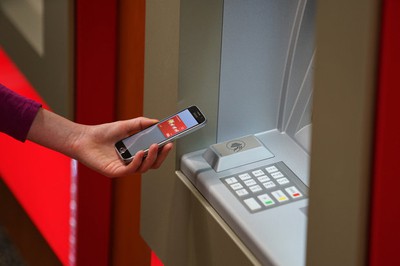 The technology enables customers to initiate an ATM transaction by holding their smartphone or wearable device with mobile payment functionality near an NFC-enabled ATM terminal and inputting their PIN.

Customers that have added their Wells Fargo debit card to Apple Pay, for example, can simply hold their iPhone near the ATM, enter their PIN, and complete a transaction, with no physical plastic card required.

Wells Fargo said it plans to upgrade the rest of the company's more than 13,000 ATMs with NFC by 2019. NFC-enabled terminals are marked with the universal contactless card symbol.

Earlier this year, Wells Fargo launched a separate one-time access code feature that lets customers authenticate at an ATM by entering an 8-digit code generated from the Wells Fargo app, along with their PIN, for card-free access.

Bank of America also began rolling out Apple Pay support for withdrawing cash from hundreds of its ATMs last year.

GaryMumford
Why do you need to enter a PIN, Is TouchID not good enough?
Score: 11 Votes (Like | Disagree)

I know what you mean, but there will come a tipping point some time in the next year or two, I think.
The "We don't take Apple Pay, but we do take Android Pay" is an irritant that I hope will soon go away. That's like saying, "We won't serve people that drive Chevrolet's through our drive through." Huh?

I had a funny thing happen to me way back when Apple Pay first hit Canada. There was a little note stuck to the terminal at a bakery I visit that said “No Apple Pay”. I had previously used my card by tapping so this was odd.

When I paid I put my iPhone on the terminal the owner (older guy) starts frantically waving his hand and saying he doesn’t accept it. Few seconds later the “Approved” message comes up on the terminal. He has this odd look on his face and I leave with my stuff. Week later I stop by again and the note saying “no Apple Pay” was gone.

I think merchant education was a big issue as lots of retailers were caught off guard by people suddenly tapping their phones.
Score: 6 Votes (Like | Disagree)

I'm surprised how much the US is seemingly behind the times when it comes to card transactions.

We still think front-loader washing machines are kind of cool and novel.
Score: 4 Votes (Like | Disagree)

Why do you need to enter a PIN, Is TouchID not good enough?

It's the same for debit transactions at Point of Sale right now for Apple Pay as well. Touch ID authenticates the card, PIN still required for the transaction, just like it would be after chip insert / swipe.
Score: 3 Votes (Like | Disagree)

Why do you need to enter a PIN, Is TouchID not good enough?

This most likely has nothing to do with ApplePay and is generic contactless support, not knowing if it is ApplePay or just a normal bank card it will ask for a PIN.
[doublepost=1507638878][/doublepost]

It's the same for debit transactions at Point of Sale right now for Apple Pay as well. Touch ID authenticates the card, PIN still required for the transaction, just like it would be after chip insert / swipe.

Really? Any where other than the US that does that? Certainly doesn't happen in the UK, defeats part of the whole point of contactless.
Score: 3 Votes (Like | Disagree)
Read All Comments