Apple CEO Tim Cook will meet French president Emmanuel Macron on Monday, according to the Élysée Palace's official published agenda. Cook has been invited to the head of state's Paris residence for an afternoon meeting, but the reasons for the visit have not yet been made public.

Topics up for discussion could include Apple's code-learning drive in schools, or perhaps more likely, the issue of corporate tax law in the country. 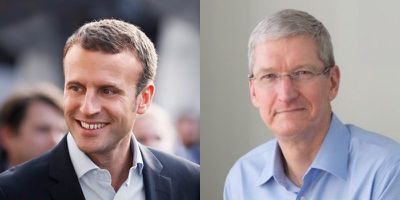 France has called for an aggressive overhaul of how tech companies like Apple pay tax across the European Union, and President Macron is one of the leaders behind the tax crackdown, which has a goal of bringing a more unified corporate tax system across the euro states.

EU officials recently gathered to look at existing loopholes which are said to have allowed tech companies to minimize taxes and grab market share at the expense of Europe-based companies, and Macron has personally been unhappy with the way French firms struggle to compete with countries where taxes and social security payments are lower.

Cook was last in France back in February when he toured the country, dropping in at local Apple Stores and meeting with French creatives and businesses.

iMi
Macron is just having problems with his dongles not working properly on his MacBook. He’s also stuck trying to find a headphone jack on his phone.

Now what would an apple CEO need with meeting the president of France?????

1 . Pay your taxes :p
2 . With Brexit, Paris might be positioning itself in a favourable position / negotiations
3. Neither knows what they are doing running the country / company and comparing notes :p
4. Simple PR for benefit of both - check
Score: 4 Votes (Like | Disagree)

joueboy
That Apple code learning school topic they’ll talk about is just like the icing decoration on the cake. I always know the motives of this talk especially Timmy. It’s not always for the interest our citizens here in France his interest his for his company. Nothing else!
Score: 3 Votes (Like | Disagree)

H2SO4
Had to edit my initial comment as I can see how it could have been misconstrued. Tim will need to be extra slimy when dealing with Marcon.
Something tells me this guy doesn't mess about.
Score: 3 Votes (Like | Disagree)

JForestZ34
Now what would an apple CEO need with meeting the president of France?????

Nope . That makes no sense given Frances position in European Politics and economics , it's in their interest that Apple pays more tax.
Score: 2 Votes (Like | Disagree)
Read All Comments

Saturday February 4, 2023 10:05 am PST by Eric Slivka
Online retailer TigerDirect has slashed pricing on the M1 iPad Air in several colors, offering the base 64GB configuration for just $313.99 in Purple and Pink. Note: MacRumors is an affiliate partner with TigerDirect. When you click a link and make a purchase, we may receive a small payment, which helps us keep the site running. That's a savings of 48% compared to Apple's normal $599.00...
Read Full Article • 402 comments

Sunday February 5, 2023 6:07 am PST by Joe Rossignol
Apple has discussed selling a new top-of-the-line iPhone alongside the Pro and Pro Max models in 2024 at the earliest, according to Bloomberg's Mark Gurman. Based on this timeframe, the device would be part of the iPhone 16 lineup or later. In a September 2022 edition of his weekly "Power On" newsletter, Gurman said there was "potential" for an iPhone 15 Ultra to replace the iPhone 15 Pro...
Read Full Article • 421 comments