Registered developers can download the iOS 11 beta from Apple's Developer Center or over-the-air once the proper configuration profile has been installed from the Developer Center. 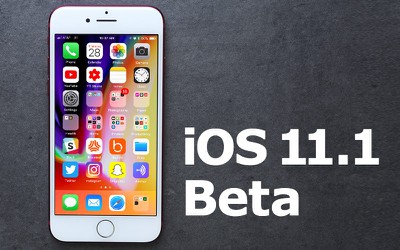 Several emoji have also seen some small design changes in iOS 11.1, including the dolphin, octopus, bee, snail, and whale characters, among others.

A few other small features were discovered in the initial iOS 11.1 beta. The built-in keyboard in iOS 11.1 now offers up multiple emoji symbols when using an emoji-related word like "cake" or "happy," with each of the suggestions displayed at the end of the predictive text suggestions. There's also an updated camera icon under Restrictions, a new animation when tapping the status bar to scroll upwards, and a faster unlock animation.

I still find hard to believe how much time, publicity and resources Apple throws into such a puny tangent such as emojis, ...

I'll try to make this simple:

Apple supports the Unicode standard for encoding characters stored on iOS and macOS, because, frankly, using any other coding system would be insane (the entire world has moved to Unicode for good reasons).

The Unicode Consortium has a group that is responsible for approving the addition of new characters and character sets to the Unicode standard, and they keep accepting new emoji characters.

Apple, in order to comply with the Unicode standard, has a few graphic artists (not software developers) design new images to go with the newly assigned emoji (and other characters). (Note also that small images are highly unlikely to break other software on the system, so such changes are comparatively easy to push through, unlike many of the more complicated software bugs.)

Apple publishes software (like this beta) that includes the new symbols (amongst many other changes) in order to keep abreast of the standards, and they don't particularly publicize the new emoji, those usually get little more than a bullet point buried in the release notes.

News/rumors sites (which you are reading of your own volition) like MacRumors (not Apple), publicize the new Unicode characters added, and, predictably, such articles get a huge number of hits by people eager to complain about new emoji in iOS/macOS.

If you want to complain, complain directly to the Unicode Consortium ('http://unicode.org/consortium/consort.html') about how they should stop adding new emoji to the Unicode character set, and/or complain directly to MacRumors (not on page 5 of the comments, but write directly to the site's owners, their email addresses are at the bottom of the site's front page) about how much coverage they give to new emoji added to Apple's OS's. Complaining about it on page 5 of the comments here only makes you feel good.
Score: 19 Votes (Like | Disagree)

Honestly Apple, can they just get their ****ing priorities right for once?

Agreed. We should move the artists that make the emoji over to fixing bugs. That’s how it works, right?
Score: 17 Votes (Like | Disagree)

iOS 11 is an absolute mess, but thank 8 pound, 6 ounce Newborn Baby Jesus that we have a female vampire emoji. I dont know what I would have done without it.

Never understood this type of response. Do you think the people who make emoji are capable of fixing crashes and graphical glitches?
Score: 11 Votes (Like | Disagree)

I bet 90% or more of iPhone users use emoji every day, and I bet 99% or more of them would not complain about home button lag, if polled. What would you work on, if you were Apple?

Edit: I assume you understand that the same artists designing emoji would not be fixing your perceived issues.
Score: 11 Votes (Like | Disagree)

DaveMcM76
People do know that the new emojis are all part of supporting the latest Unicode standards don’t they? Apple aren’t just making them up and adding them for the sake of it...
Score: 9 Votes (Like | Disagree)
Read All Comments