Apple's lineup of iPhones next year will introduce a larger-screened LCD model, measuring more than 6 inches, according to a report today by The Bell (via The Korea Herald). It's unclear whether this size will be an additional offering to the current LCD iPhone lineup (including 4.7-inch and 5.5-inch models), or if it's replacing these sizes completely.

In May we heard the first rumor about Apple's 2018 iPhones, which at the time focused solely on the OLED versions and did not mention the LCD models. This rumor stated that the devices would come in 5.28-inch and 6.46-inch OLED screen sizes. A subsequent report by ETNews suggested that Apple had ditched the small 5.28-inch size and moved to focus on 5.85-inch and 6.46-inch models, and today's report corroborates those claims. 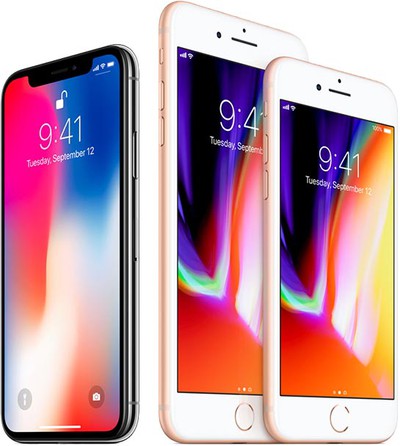 This means that next year Apple could potentially launch the following iPhones: a 5.8-inch OLED model, a 6.46-inch "Plus" OLED model, and at least one LCD model that measures 6 inches (or larger).

Apple has decided to ditch the smallest 5.28-inch OLED iPhone next year, while adding a larger -- possibly more than 6 inches -- LCD model into the full lineup, according to The Bell on Sept. 25.

Citing local parts makers, the report said Apple had originally given panel orders to Samsung Display, its sole OLED supplier, under a plan to launch three OLED iPhones next year -- 5.28-, 5.85-, and 6.46-inch models. But the report said the development work for the 5.28-inch model has recently been suspended possibly due to the low marketability of the smaller version.

The Bell cites local parts makers who claimed that Apple decided to scrap the 5.28-inch model of next year's iPhone "due to the low marketability" of such a small-screened device. Apple is said to have given OLED orders to Samsung Display for the other two sizes.

Apple will continue sourcing 2018's LCD iPhone screens from supplier Japan Display, which already includes panel orders for the new larger screen size. According to industry watchers, Apple's decision to ditch the 5.28-inch iPhone 9 is due to the "popularity of larger-screen phones for video viewing." A 6.46-inch iPhone would be larger than Samsung's 6.3-inch Galaxy Note 8.

In regards to when Apple might switch to OLED-only iPhones, 2019 has been eyed as the year that Apple might finally make that transition.

Val-kyrie
How about OLED in a smaller form-factor? (looks at SE)
Score: 51 Votes (Like | Disagree)

Isn't this what almost killed Apple in the 90s?
Score: 33 Votes (Like | Disagree)

How about OLED in a smaller form-factor? (looks at SE)

I agree here they should have 3 phones next year. iPhone SE OLED, iPhone OLED and Plus OLED all with edge to edge and the new front FaceID camera modual.
Score: 22 Votes (Like | Disagree)

Sunny1990
A 6.46-inch iPhone with OLED display would be much nicer.

mikecorp
THIS ONE FOR ME.

Tunster
Why not a miniature version of the iPX? I'd grab a 4 or 4.5" version instantly.
Score: 15 Votes (Like | Disagree)
Read All Comments

Friday May 7, 2021 1:51 am PDT by Tim Hardwick
An early look at an ongoing analysis of Apple's App Tracking Transparency suggests that the vast majority of iPhone users are leaving app tracking disabled since the feature went live on April 26 with the release of iOS 14.5. According to the latest data from analytics firm Flurry, just 4% of iPhone users in the U.S. have actively chosen to opt into app tracking after updating their device...
Read Full Article • 234 comments

Sunday May 9, 2021 2:00 am PDT by Sami Fathi
Zoom, a hallmark platform used by millions during the global health crisis, has been given access to a special iPadOS API that allows the app to use the iPad camera while the app is in use in Split View multitasking mode. This case of special treatment was first brought to attention by app developer Jeremy Provost, who, in a blog post, explains that Zoom uses a special API that allows the...
Read Full Article • 358 comments

Monday May 10, 2021 10:41 am PDT by Juli Clover
Apple's upcoming iPhone 13 models will be slightly thicker than the iPhone 12 models and will also feature larger, thicker camera bumps with lenses that protrude less, according to iPhone 13 schematics seen by MacRumors. The new iPhone 13 and 13 Pro models are expected to feature a thickness of 7.57mm, up from 7.4mm in the iPhone 12 models. That's an increase of 0.17mm, which won't be hugely ...
Read Full Article • 193 comments