iPhone X and iPhone 8 Plus to Feature 3GB RAM, iPhone 8 to Have 2GB

Details about the unreleased iPhones Apple will announce on Tuesday continue to trickle out from the iOS 11 golden master that was leaked on Friday, and the latest information, sourced from developer Steve Troughton-Smith, confirms the RAM we can expect to see in the three devices.

The upcoming 5.8-inch OLED iPhone X and the 5.5-inch iPhone 8 Plus will both offer 3GB RAM while the 4.7-inch iPhone 8 will include 2GB RAM. 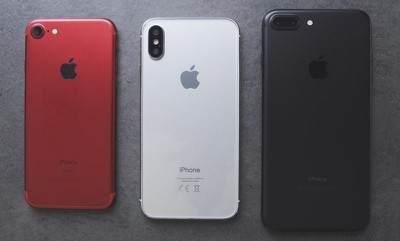 iPhone X dummy model (in center) compared to iPhone 7 and iPhone 7 Plus
That's in line with rumors about the three devices sourced from reliable KGI Securities analyst Ming-Chi Kuo, who previously suggested the two larger devices would have 3GB RAM while the smaller 4.7-inch iPhone would continue to offer 2GB RAM.

Kuo also said the DRAM transfer speed in the three new models would be faster than the iPhone 7 by 10 to 15 percent to enable better AR performance, but that has not yet been confirmed.

Apple is planning to announce three iPhones at its September 12 event, with names for the device confirmed earlier this weekend. The high-end 5.8-inch device with an OLED display will be called the "iPhone X," while the two other 4.7 and 5.5-inch devices with standard LCD displays and designs similar to the existing iPhone 7 and 7 Plus will be called the iPhone 8 and the iPhone 8 Plus, respectively.

Many other details about the iPhone X surfaced this weekend in the iOS 11 GM, including information on Face ID setup, Apple Pay with Face ID, Animoji, the split status bar, the A11 processor, and the design and size of the device.

farewelwilliams
just enough so that it'll slow down by the time iOS 12 is out
Score: 70 Votes (Like | Disagree)

SoApple
Apple’s never had a problem with ram. Their phones outperform every single android phone. See note 7 vs iphone 7+ And every other comparison video.
I read that snapdragon is just now catching up to apple A9 chip in single processing power. Not worried.
[doublepost=1505105077][/doublepost]

The note 8 has 6gb of ram. I’m willing to bet that the new generation iphones will outperform it.
Score: 39 Votes (Like | Disagree)

Apple’s never had a problem with ram. Their phones outperform every single android phone. See note 7 vs iphone 7+ And every other comparison video.
I read that snapdragon is just now catching up to apple A9 chip in single processing power. Not worried.
[doublepost=1505105077][/doublepost]

The note 8 has 6gb of ram. I’m willing to bet that the new generation iphones will outperform it.

That's because Java (which is at the core of Android) has crap memory management compared to iOS. iPhones don't need 6GB of RAM as the OS is significantly more optimised both in its design and because Apple also develop the hardware.
Score: 20 Votes (Like | Disagree)

Sunny1990
With 3 GB of Ram iPhone X can still outperform All Android Device.

Apple’s never had a problem with ram. Their phones outperform every single android phone. See note 7 vs iphone 7+ And every other comparison video.
I read that snapdragon is just now catching up to apple A9 chip in single processing power. Not worried.

Haha. Please just use now a 6 plus and see how poor it performs.

Back in the days it had constant safari reloads and now its slower than a 5. This is just 3 years for a $900 phone.
Score: 12 Votes (Like | Disagree)
Read All Comments